Published by Abby on January 23, 2008. Filed under Faith and my Mom 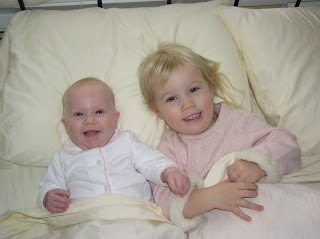 I’ve been a Christian for a long time and a Baptist even longer. Therefore, I have been present at a LOT of altar calls. I guess you all know what those are…the time when the preacher, at the end of the service, calls for anyone who would like to make a public profession of faith to come forward (people also go down to just kneel at the altar and pray, or ask the preacher questions, or join the church…). Basically, they all end with, “If the Lord’s leading, won’t you come today.”

I think it may be a requirement in the Baptist church to do this after every meeting. Jeremiah’s grandfather was a Baptist preacher, and they even did it at his funeral! While I think that they are a good idea, there have definitely been revivals or seminars I’ve attended where I felt like the speaker basically guilted half the congregation to come forward :). I say all that to tell you, that oftentimes the preacher will ask anyone who has made a decision to pray with him, and then he’ll proceed to pray a prayer that ends with you being a believer. I pray that prayer EVERY time. Then they usually ask you to raise your hand or come forward if you prayed it, and I never do. You see, while I’ve had the Holy Spirit living in me for 17 years or so, I felt like it never hurt to ask Him to come in one more time. When somebody starts saying, “If you have ANY doubt that if you died driving home from here tonight, you would find yourself in the presence of the Lord, then you need to pray this prayer with me right now.”

That’s some pressure, isn’t it? ANY DOUBT…ANY. Well, I am here to confess that I sometimes have felt doubt. Can this all really be real? Doesn’t it sound a little too good to be true, that the King of the Universe died a gruesome death, just so that I could spend eternity with him? I love magic and mystery, but I spend so much time telling myself that the books I read aren’t real, so could the Bible just be another elaborate story? These questions have never plagued me, but I have thought them. Therefore, when that preacher has said ANY DOUBT, I have always been ready to add a little more security to my promise.

Then, Mom. I always thought that if God chose to take Mom, I would really start to struggle with those questions that have always wanted to creep into my heart. If one of my rocks of faith was wrong, what would happen to my own faith? I am here to proclaim to you that the exact opposite of what I believed would happen, has happened. Our God is beautiful and mysterious, we can never understand His ways, but He is also all-knowing. I believe that if he had healed Mom, miraculously, like I so desperately begged Him to do, then I would have had a quick fix. An adrenaline rush that probably would have lasted for a year or so, followed by a truly awesome story to share with others for the rest of my life. Now, those who saw the miracle first-hand would have hopefully believed, but do you think that every person I shared her story with on the street would have believed? To believe in a God who does miracles, you must first BELIEVE in God. My testimony could never be as convincing as the argument He’s already made for himself in His word.

So, that was the hypothetical, but what’s the reality? The reality is that I sat in a church service last week, and I heard the guilt trip shpill at the end, and for the first time my heart didn’t quaver. A smile came across my face, and I thanked Jesus that I didn’t have to wonder any more. He has carried me through a raging fire, but He showed me how to tuck my face into the hollow of his neck, to shield me til we reached the other side. He’s put my feet back on the ground, but he’s still holding both of my hands and coaxing me forward. He’s become so real in my every-day, that I don’t have to be immersed in His word or prayer to feel His presence. He is real. He is dwelling within me. He has shown himself to be enough no matter how hot the fire. And now I can smile through those altar calls.