And the Two Become One

Published by Abby on January 4, 2007. Filed under Love and Marriage-Family 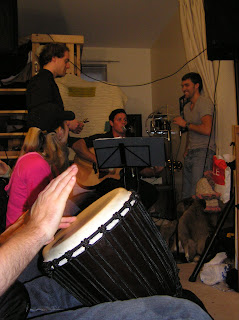 Jeremiah and I just got back from a four day, three night trip to New York City for New Year’s Eve! There are several highlights that I could tell you about (and maybe I will tomorrow), but one thing that really touched me on this trip was the joy of entering someone else’s little world. Jeremiah’s brother and sister (Josh and Alex) live in an apartment in the city. I’ve heard stories of the small room that they share, the coffee houses they frequent, the parks they run in, the friends they’ve made, and the big city they’ve learned to navigate. I’ve tried to picture them there many times as I’ve listened to their accounts, but my mind had trouble moving past two faces smiling broadly in the bustle of Times Square. Their new way of life was just so foreign to me that all I could form were blurred images of what they must encounter day to day. For me, to get to see and experience their lives first-hand was enchanting.

When I worked at the PSDF in Wilsonville, it was important to me that Jeremiah make the trek out there and see for himself where I worked. I wanted to feel him in my everyday life. I wanted to know that when I told him I was sitting in the control room, he had a visual image of what that meant. In my mind, seeing where I worked was a part of KNOWING the “new” me. There was also an added bonus, because Jeremiah’s prescence at my work made it more familiar than it had been before his visit. I enjoyed looking over at my “visitor’s chair” and remembering what he had looked like sitting in it. When I climbed the stairs into the intimidating structure, I remembered the laughter we had shared thinking about me running something that big. No longer were my co-workers just stories around the dinner table, they became real people to him, and in doing so, they became a bit more real to me as well.

So, I don’t know if Josh and Alex will feel any difference after knowing that their family has taken a dip into their new lives, but I know that I certainly enjoyed the plunge.

No Responses to “And the Two Become One”