Published by Abby on November 5, 2008. Filed under Life and Laughter 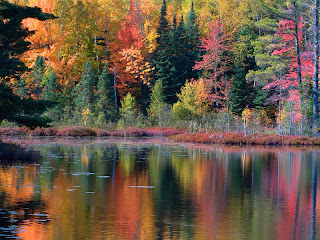 This morning, I went running on a Birmingham mountain (really just an oversized hill), and I was overwhelmed by all the magnificent trees that surrounded me. I was sad that I was running such a narrow, rocky path, because I would have liked to spend the whole run looking up at those trees instead of down at my feet. It made me think about God (as nature often does) and about how well He does things. He could have said, “Ok, trees need to have life and death cycles once a year for everything to work like I need it to in the universe. So, when the weather starts to get crisp WHAM all the leaves will die, turn brown/black, and fall to the ground.” Instead He gives us a profusion of color in their death that makes fall a magnificent time of year to be alive. 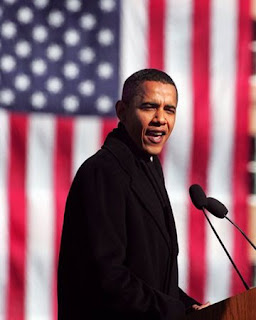 Apparently, God was loving another kind of color change this fall as well 🙂 While I will admit that at 10:30 last night when the “OBAMA ELECTED!” signs started flashing all over our television screens, my initial reaction was a pit in my stomach, followed by some ranting about Democrats. My main issue is that, while this whole tax cut for people making less than $200,000/year is going to do wonders for us down here in the “just above food stamps” bracket, I think it is heinously wrong. I think our country was founded on the ideal of capitalism–the idea that if you work hard you should be able to get ahead–and KEEP your own stinkin‘ money as an incentive to continue to work hard and fuel the economy. I understand that there are people who physically cannot support themselves and I would be a heartless person to say I don’t think they should be helped. However, I think that our welfare system is SO corrupt that that money is not getting to the people it is intended to reach. At this point, I am getting politically over my head, but I will end my rant by saying that I think we are slowly turning into a Socialistic country–so slowly that people will hardly notice the differences–and this will turn our already flailing economy into a pit.
All THAT said last night to Jeremiah as we went to bed, I was able to drift off to sleep and wake up this morning to the fact that we will have an African American President of the United States. I am sure you have all heard that so much today that you don’t care to hear it from me again (so I’ll spare you all my musings on why that is so incredible), but just like yesterday when my chest puffed with pride at the thought of being a part of diverse America, it puffed with pride for much the same reason this morning. I heard Bubba (of Rick and Bubba) say on the radio this morning, “If the Democrats want the keys, then, heck, toss ’em too ’em and lets just see what they can do with this mess. Good luck.” (That was extremely paraphrased.) Those two things pretty much wrap up how I’m feeling today. Proud to be an American and interested to see what our next President (and majority democratic Senate and House) are going to do now that THEY are at the wheel. Just like the leaves in the fall, in my own little heart, it feels a bit like things are dying with this new color change in Washington. The death is not the fault of the color, but what’s going on on the inside. I hope I’m proved wrong and everything comes back green again in the summertime.