Published by Abby on November 3, 2008. Filed under Love and Marriage-Family 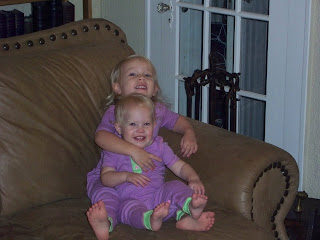 This weekend we went back to Dothan. We didn’t want to travel again, BUT it was Dr. Maddox’s 60th birthday, Josh and Berkley (Jeremiah’s brother and his girlfriend) were coming home from New York, my friend Lindsay was having a wedding shower, the Peanut Festival was in town, and we just could not say no to all of that. We did take the girls “Trick or Treating” Friday night. They were both Tinkerbell, and I have NO pictures. I forgot my camera y’all, and I am just sick about it.

I got to meet one of you, which was a really fun surprise. We sort of randomly took the girls to the Garden District for their candy excitement and as I was saying, “Pace, what do you say…” (to remind her to say “Thank you” for her candy) the lady at the door said, “What did you just say her name was?” I told her, expecting to hear that she had a friend named that or something, and what I got instead was, “Oh my gosh, I knew you all looked familiar. I am one of your blog stalkers!” It was sort of surreal. I felt, I don’t know, known. It was crazy, and I am SO glad she introduced herself. It made my night 🙂

Sunday was such an incredible day! Ashley (Jeremiah’s sister) and I planned a surprise 60th birthday brunch for Dr. Maddox. It was Ashley’s idea to surprise both her Mom and her Dad. I must say I was a bit nervous about pulling one over on my MIL in her own house. Especially since we busted out all of her silver and fine china, and re-decorated her very elaborate dining room. But we didn’t want her to be stressed out either…she seems to be always hosting other people and we thought she deserved to just enjoy the moment. So we did it. Ashley cooked all her food in Birmingham before she left. I cooked all my food at my Dad’s house, and we hid it all in their downstairs fridge. Then, when the door closed behind our family as the sweet little Christians went to church, Ashley and I got to work.

Ashley is a natural entertainer. It’s her element. She loves to cook, to serve others, to plan meals, and she can do it all with such a laid back demeanor that it amazes me. That is why I love to throw parties with her. I just let myself get caught up in the swell of her excitement and enjoy the ride. Can I give you the menu? Is that boring? It was just all so good I don’t want to forget. Ashley made a ham and Swiss quiche, a savory quiche, monkey bread, mini parfaits (filled with vanilla yogurt, granola, strawberries and blackberries), and an Italian creme cake for the birthday boy that was so moist and delicious it deserves its own post. I made a hashbrown casserole, stuffed roasted tomatoes, fried bacon, and Conecuh sausage on the grill (can you tell who’s the better cook?). We served mimosas and coffee out of big beautiful silver pitchers.

Now the setting…We used white bone china with red glass accent plates. There was a fire roaring at one end of the room and a cut-glass bowl filled with floating roses from the yard was the simple decoration at the center of the table. We drank out of silver goblets and stirred cream into our coffee with the most adorable tee-nincey spoons I’d ever seen. And perhaps the best part was that everybody lingered. We didn’t rush through the meal and run start the dishes. Everybody just ate and talked and ate and talked. After we finished that, the boys pulled out their guitars and sang, and finally we ended the day taking a big family horseback ride around the farm. It was a beautiful memory. Thanks for turning 60 Dr. Maddox! We’ll have to do it again sometime 🙂 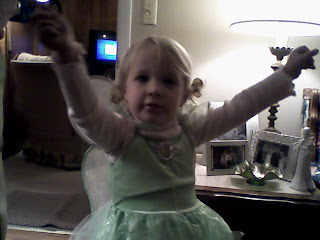 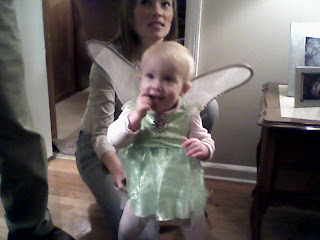 As horrible quality as these are (they are off Jeremiah’s REAL hi-tech cell phone) they are the only Halloween evidence we have. At least you can get the idea. We figured out at the end of the night that I’d put Mary Aplin’s wings on upside down. So, she looks more like Dumbo than Tinkerbell 🙂

6 Responses to “Back to Dothan”