Back to the Hospital

Published by Abby on November 6, 2007. Filed under Love and Marriage-Children 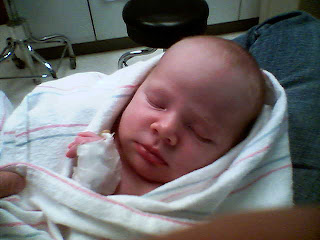 This past Thursday morning, I was undressing Mary Aplin for her first “post yucky belly button thingy is gone so you can finally have a real” bath, when I noticed that the little bald head resting against my cheek felt a warmer than normal. I took her temp, and it was 100.1. I went and checked my “Discharge Instructions” from the hospital, vaguely recalling seeing something in there about what temperature should lead you to call a doctor in a newborn. You see, I have this fear of seeming like a hypochondriac to medical people. I think it stems back to Dr. Lees making me feel like a big faker as a child in the pediatrician’s office, but that’s another story. I find what I’m looking for, and apparently, you aren’t supposed to call unless the newborn’s temp. is above 100.4. So, I go on about the day.

Later, I hear a little cry as she wakes up from her afternoon nap. I go into her room and scoop her up, and as soon as that little head touched my cheek, I knew we’d exceeded 100.4. Sure enough, her fever was 101.3, so I called the doctor’s office. Mrs. Ohs, a dear family friend who Jeremiah lived with that year he was playing cowboy in Montana, happened to be at our house for a visit. I was trying to cook a fun dinner that night in her honor, so I asked if she would stay with Mary Aplin and Pace (since both were napping) while I ran to get a couple of things at the grocery store. Freedom!!! While I was shopping, the nurse called me back. I’m expecting her to tell me what dose of Tylenol you can give a 2 week old baby. Instead, she asks me if I can re-check the temperature immediately. “No, I’m at the grocery store…” I reply, and I feel a knot begin to form in my stomach as the condemnation comes roaring through the phone line. “Well Mrs. Maddox, a fever in a baby of Mary Aplin’s age is very serious. You need to take her to Children’s Hospital ER immediately. I’m calling ahead to let them know you’re on your way.” (Translation:Why, negligent mother, did you leave your infant and go to the grocery store when she is obviouly ill. Take her to the doctor, now, and not when you finish your ridiculous grocery shopping) I would also like to add that my phone is beeping and about to die while she is talking and putting me on hold to confirm things with my doctor. I was frantically asking the kind workers at Publix how I could get to a phone to call the evil nurse back if my phone did die–rendering me an even more neglectful mother who takes a semi-dead phone with her while she is abandoning her sick newborn. I am really nervous about going back to Publix after the scene I made. There were actually two people who tried to shove their cell phones on me, as I dashed to customer service with my full cart of groceries, to get to a phone.

I, thankfully, was able to leave Pace and all my groceries that needed to be put away, with Mrs. Ohs. I zipped to the ER telling myself that the nurse was just being precautious and that my sweet Mary Aplin just had a low grade fever and was going to be perfectly fine. In the meantime, that knot in my stomach was growing bigger by the minute, especially since my doctor husband wouldn’t answer his phone OR my pages that I had typed 911 after. The knot got larger as I noticed all the horribly (honestly dirty) and sick children crouching in every orfice of the waiting room in the ER. I concluded that if Mary Aplin wasn’t deathly ill when we came in, she certainly would be by the time we left. The knot grew larger when a nurse came in and told me that they would be performing a “lumbar puncture” (surely they could find some other phrase to use besides something that brings visions to a mother’s mind of a poking holes in her tiny baby’s spine), drawing blood, putting in a cathater to get a urine sample, and starting an IV for antibiotics. I was still holding onto the need to NOT be the dramatic, over-exaggerative mother until the doctor came in and added that we would also have to stay in the hospital for at least 48 hours. The dam broke. There was only so long I could hold it together on my own.

I soon found consolation in sweet Mary Halsey Maddox. She was in Jeremiah’s medical school class, became one of our good friends, and is now doing her residency in the ER at Children’s. She came in and assured me that every doctor and nurse who cared for us was the best. Then she assured me about all the prcoedures that were going on, and paged Jeremiah to let him know that he REALLY needed to come, and that I wasn’t just being a hypochondriac this time 🙂 While we waited for the test results to come back, we discovered that the hospital was at full capacity, so we would have to spend the night in the (dirty) ER. This turned out to be OK, since Jeremiah was on call at Children’s that night. He would leave our room, see a consult, then come back. I actually saw him a lot more than I would have on a normal night on call.

All the tests came back, and Mary Aplin has a urinary tract infection, which is apparently pretty serious in babies as young as she is. They told us that we would have to stay in the hospital for 7 to 14 days to do intravenous antibiotics. Since they have virtually no immune systems, these infections could potentially spread to their blood streams and can even cause spinal meningitis if you don’t catch it early enough or treat it properly. You also worry that something didn’t “form right” (why does that sound so country as I type it?) when you see infections this early. They did an ultrasound, and Mary Aplin does have all of her organs in the right place. However, there was some fluid in one of her kidneys, so they are doing another test Thursday morning to make sure she does not have reflux. This would mean that when her bladder contracts, some of her urine is going back to her kidneys. Even if she does have reflux, they say it would probably resolve on its own as she grows.

SO, if I could end with a few more prayer requests for you 🙂 Pray that Mary Aplin doesn’t have to stay on long-term antibiotics or have surgery. Pray that Pace, who is staying with Mrs. Ohs at our house, will behave and not think that she has been abandoned by her parents since Mary Aplin has gotten here. Finally, Mom is definitely going to Savannah to meet with Gene Hall this weekend!!!!!! so keep praying for HEALING and to see God’s glory through all of this. Love you all and greatly appreciate your encouraging notes and phone calls. Does anybody else feel like they have way too much drama in their life????

9 Responses to “Back to the Hospital”