Bama Belles and Another Brush with Fame

Published by Abby on December 6, 2010. Filed under Love and Marriage-Family
Did y’all watch? Jeremiah and I certainly did. I think it’s the first time we’ve sat down and watched any television show (except for the occasional Saturday Night Live) since the second season of Grey’s Anatomy (when dead lovers started coming back to life, we decided it was time to hang it up :)).
I have gotten several calls, emails, and texts today asking me what I thought. For anybody out there who cares…I was pleasantly surprised. I think it showed women, from different walks of life, who live in the South. We aren’t all the same, and I am thankful for the differences. My biggest fear was that only one walk of life would be represented–ignorant red-neck. While
there was an element of that, I feel like TLC made an effort to show that everybody is not that way. That’s all I ask.
Did some of these situations seems contrived?–Absolutely. But what do most of us do when it’s 100 degrees and 100% humidity on a summer day? You keep your butt in the air conditioning as much as possible. Would that make for entertaining television? I think that the girls were doing activities that were true to at least one member of the group, and the rest were going along to see what happened. As far as reality show scripting goes, I’d say that’s pretty mild. Obviously, I’m no judge of what makes good television, but I was entertained last night. I laughed out loud when Melissa was a frantic mess before her company arrived, only to turn around and greet her visitors minutes later with fresh make-up, a big smile, and the most loving welcome known to man. I felt like I was re-watching a scene from my childhood–baffled at how my Mom could be screaming at us one minute and loving on a visitor
the next. I wanted to hug Jana in all her vulnerability, and I wanted to take her Mother-in-law out back and have a word with her. I thought Josh looked very handsome, and I’m wondering how in the world they’re going to spin the whole drama with him.
There were moments that made me cringe, but all in all, I thought it was…good. About the lives and struggles, vulnerabilities and strengths, and funny hobbies of a group of (mostly) Southern women.
On a whole different subject, I need to do a little bragging. Watson Downs, who I babysat throughout my teenage years and who my little sister has been dating since eighth grade, made the final tackle in Auburn’s SEC Championship win Saturday night!!!! I was so proud I could have burst!!! If anybody wants to watch, it’s in the last 20 seconds of this two minute video. He’s number 51. 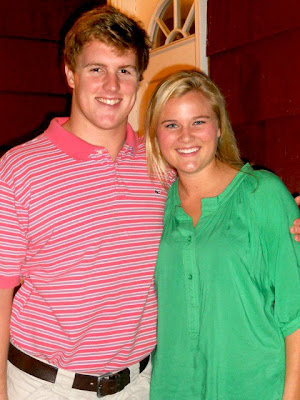 5 Responses to “Bama Belles and Another Brush with Fame”