Published by Abby on January 29, 2007. Filed under Life and Laughter 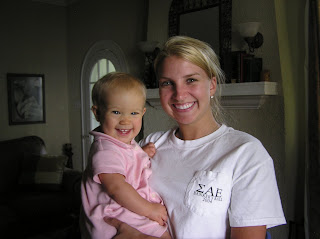 Sometimes, when I look back over my life, I’m amazed to see the evidence of God taking sweet care of me through the people he’s strategically weaved into my life. At every major transition , there was always somebody, doing His work, to help me.

Transition 1: Let’s getter through grade school…
After first grade, I left a small, private, Christian school and entered the public school domain. It was a scary transition for me, and I distinctly remember spending our recess periods standing against a fence at the far end of the playground all by myself. I just didn’t have the confidence to bust into the friend groups that had already had ALL of first grade to be established. Little did I know that God was whispering to the heart of a cool, spunky girl with a side pony-tail and crimped hair–her name was Whitney Ward. She already had a best friend (Allison Wells), and they were too cool for everybody else on the playground. However, one day she came up to me as I stood with my back to the fence and invited me to join their group. That was the beginning of my life-long best friend who has helped lead me through countless trials, and boys, and insecurities, and dances, and wardrobe malfunctions. She is the constant, and God’s first gift.

Transition 2: Middle school to high school. She’s gone need more than just a friend here…
I left the public school arena after 8th grade and switched to another private school, but this one was “a college preparatory institution.” If I’d been intimidated by those year-old friendships back in second grade, imagine my dismay at facing a group of kids who’d now been forming bonds for up to 11 years!!! Not to mention the fact that they had a reputation for being snobby, rich kids. When I first started at HA, I dreaded break and lunch so much that I would rather have been in class. I was no longer unable to introduce myself to people, (I had developed a bit more confidence than that) it was just so much work. There weren’t enough seats at the “cool girl” end of the table, so every day I either had to be early (which was virtually impossible for me who always had questions for the teacher after class) to get my own seat OR I had to ask somebody if I could share their seat. OOHHH the agony of it! I walk into the lunchroom, frantically scanning the cool girls and trying to decide who I felt chummy enough with that day to ask if I can sit butt-to-butt on a seat that’s about 6-inches in diameter. I am just going to admit right here that there were a few days that I simply couldn’t face it, and I snuck down to the gym locker-room to eat a quiet and stress free lunch.

I digress, but God sent me two people to guide me through this big phase. The first was Lindsay Prophet. She was/is a genius and a cool girl. She took me under her wing in my 9th grade biology class and guided me through everything from geometry to organic chemistry. Somehow the Lord convinced her that she learned better if she taught what we’d learned in class. I was a gracious recipient of her new-found learning method. I’ve made it sound like Lindsay was my tutor or something, but that isn’t an accurate depiction. She was my dear friend, who was also a genius.

Then, there was Michael Wydner. He was the baseball star, the SGA president, the class clown, and the teacher’s pet all at the same time. I was the new, shy girl who had an assigned seat right in front of him in history class, and God told him it was time to bring some personality out of me. He made me laugh so hard and also humiliated me so many times, that I had to learn to laugh at myself or I would have died of embarrassment. Somewhere in that process he also became my best friend. I got to see a side of him that wasn’t the class clown, and we had each other as both of our mom’s fought cancer and won. The Lord provides.

Transition 3: Now we gotta getter through college AND CHEMICAL ENGINEERING…
They say it takes a community to raise a child. Well, it took 7 people just to get me through college. First their was Counsel. Sorority rush was the start of my college experience, and I felt myself thrust into a sea of beautiful and talented girls. I had Whitney by my side again but most other securities were stripped away. It seemed impossible that I would ever find my niche, my life-long friends, the girls who would stand beside me at my wedding…but the Lord was watching. Holly, Jessica, Lindsay, Mary Grace, Sara Beth, and Whitney (listed in ABC order because no one should be above another), lovingly referred to as Counsel. These girls were my support, my teachers, my confidantes, and most of all my FUN. Without them, I probably would have spent all of college studying and pining away after Jeremiah. To this day, they know more about me and have more bribe-quality stories about me than anyone else (except maybe Jeremiah :)) They are a part of me.

Then, there was Stewart. Lindsay Prophet went on to UVA, and left me to face ChemE on my own. I looked out over my introductory engineering class and prayed to find someone who looked “normal.” In the distance I saw a Sigma Nu T-shirt and I thought, thank you Lord at least there’s one. When I graduated I told Stewart that he really should probably walk across the stage with me; he had certainly earned it. I must say that I did bring something to him, and that was discipline. Stewart is one of those people who is brilliant and could get by with very little effort (even in something as hard as ChemE). I forced him to do his homework and study for tests, even when there was a great band party going on. He, in turn, tried to teach my brain to think like an engineer. Another strong friendship was born.

Transition 4: Marriage.
God did something very sweet for me at this stage in life. This would seem like the biggest step yet, like the one where I would need the most support, the strongest hand to hold, but I was out on a cliff with nobody to my left or my right. I got married after my junior year in college and there was NOBODY taking that step with me. Counsel was completely dumbfounded by the thought of it! This, however, was the sweet gift…I only had Jeremiah. God taught me that he was that support and that strong hand. I had to learn to depend on him, and it was such a fun jump off that seemingly lonely cliff.

Transition 5: Can she handle the working world???
You graduate from college, you have a degree, and suddenly you are expected to KNOW something! It is terrifying. There’s responsibility, mass quantities to learn, and the people around you actually think you ARE an engineer. If all this weren’t enough, I was at a research facility in Wilsonville, with a bunch of brains, and desperate to find a normal person again. God didn’t make me wait long for this one, because I walked into work on the first day with a cute blond girl with a deep southern accent named Farris Wallace. We sized each other up and soon discovered that we could be girlie girls AND chemical engineers together. I had somebody to eat lunch with, complain about my husband leaving cabinets open with, and admit when I was intimidated and lost at work. God just kept on giving.

(I realize that I have used the word normal in referring to Stewart and Farris. It sounds so shallow when I read back over it, but I really just mean people who are similar to me. I realize that I am not normal anymore than anybody else, and I had great friendships with people in my ChemE class and at work who I shared virtually nothing in common with. I am taking for granted that anybody who is reading this is my friend and knows that I don’t consider everybody who is not like me, to be not normal.)

Transition 6: The baby carriage…
Here I was again, back on the edge of that lonely cliff. I was 23 and about to have a baby. Counsel hasn’t even started getting married yet, much less thought about having babies. After trying to go back to work, God quickly tells me that He needs me at home. How I think? How can I quit work? How will we have enough money to live? Will I be depressed, by myself all day with no interaction? Before I actually quit, God sent over 2 of my neighbors who had both just (within 2 months of me) had babies and were stay-at-home Moms living on tight budgets. Lauren Brooks and Ashley Johnson. They talked to me about how they managed and helped give me the courage to take the leap I knew God was asking me to make.

Throughout those first trying months of being a new mom, the three of us took countless walks, had tea on each other’s porches, read books and discussed them, but mainly we were able to vent all the fears and questions of motherhood to each other. God planted those two friends, literally right across the street.

I am sure that most of you quit reading after paragraph one (that had to get boring for people who aren’t me), but I hope you will skim down to this last paragraph. After looking at my life, I’ve realized that God created me as a person who needs people. He knew exactly the friend I needed for every major transition in my life, and He provided them. It is so humbling to realize that the God of the Universe took the time time to bring people in my life to make it rich. Who am I…nobody, but to Him somebody who was worth it. How can we have a low self-esteem if we realize that? I am so thankful, and completely undeserving of all of these best friends.