Published by Abby on December 5, 2006. Filed under Life and Laughter 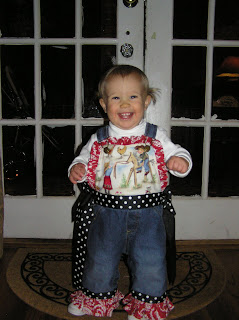 I remember being in the 7th grade and having a major life dilemma over whether or not to ask Mom to buy me a pair of $72 Calvin Klein jeans like everybody else had. I felt like they were just too expensive to ask for, and I settled on a pair of bobo (no name brand in case any of you aren’t familiar with that terminology) jeans that I thought made me look skinny. That was a Thursday afternoon, and I arrived at school that next rainy Friday morning sporting my new jeans AND my new purple and white Asic shoes. Always one to want to preserve the newness of my clothes as long as possible, I gave myself a quick cuff on the bottom of my jeans to ensure they wouldn’t be muddied by the rain…I knew it wasn’t cool, but I wanted to protect those bobo jeans all the same. Now, if you know my family very well you know that being early anywhere, especially to school, was a miracle in itself, but the Lord had a lesson to teach me that day and He somehow got me to Girard Middle School at least 10 minutes early that morning.

I look out at this “early” crowd standing in huddles in the band room–where apparently early people go when it’s raining and the school hasn’t opened yet–and was faced with a frantic decision. Everyone stops to look at the new person in the room, and I had to decide where I belonged. There was definitely a cool group, sitting back by the drums, and it held more familiar faces to me than any other group, but still they weren’t what I would call my friends. My friends lie somewhere in between. I wouldn’t say that I was a dork in middle school…I just wasn’t the cool of the cool either. I didn’t drink or do crazy things with boys or have super human self-confidence, and without at least one of these traits, I don’t think if was possible to be elite at Girard Middle. So, I have this decision to make, and maybe it was the new skinny bobo jeans that I was feeling oh-so-good about myself in, but I decided to go for it. I headed straight towards the cool guys in the percussion section.

I think that God’s grace has allowed me to block out exactly what the hurtful comments were that I was met with when I entered that circle. I remember it was Wesley Carpenter that started them and a few other guys threw in a joke here or there, but the basic jist was, “Why are your tight jeans ROLLED up, and why are your tennis shoes so WHITE.” To their defense, they were probably insecure boys trying to be funny to one another, but I was so mortified it was everything I could do not to burst into tears on the spot. I tried to laugh at myself with them, but it was one of those times when laughs do nothing but jiggle your already unstable emotions and I found myself dangerously on the brink of losing it.

I went home that afternoon, and Mom could see by my face that something had gone wrong. I was too embarrassed to tell her at first. I knew she had been the supreme cool girl at my age and I didn’t want her to know how far her daughter had fallen from the tree. I also new she would feel bad about my jeans…and it wasn’t her fault. Well, she kept prodding and I finally burst, literally, into the tears I’d been holding back all day. I gave her the kindest version I could of what I’d endured, and then admitted that I just didn’t know if I could stand to go to the football game that night and risk the ridicule again. Then, Mom did something that I will never forget. She had to take my other three sisters to ten other places that afternoon, so she called Aunt Alice and asked her to take me to the mall as quick as she could and buy me the best pair of Calvin Klein jeans we could find!

I recall that whole long experience just to pose a question that has been bothering me since yesterday. I got a new pair of jeans (they were actually a gift from Mrs. Maddox) that cost about three what those expensive Calvin Kleins cost Mom in middle school. I certainly don’t feel like my self-esteem is tied to my jeans like they were back then, so why do I feel the need to spend that kind of money on a pair of blue jeans? Sure they fit great, and they are made out of good material, and I’ll wear them all the time…but couldn’t I get some cheaper ones that fit just as well??? I have admitted something to myself, and I honestly don’t know if it is wrong or not. I can wear clothes from Wal-Mart and be happy, but there is something about putting on a dress, a pair of jeans, or perfume that I know is expensive that makes me feel extra special. There is something about the luxury of it that is exiting to me. Is that wrong? I don’t feel like my self-worth comes from the brand of clothes I’m wearing like it did in 7th grade, but what if I’m just deceiving myself?