Published by Abby on September 26, 2008. Filed under Life and Laughter 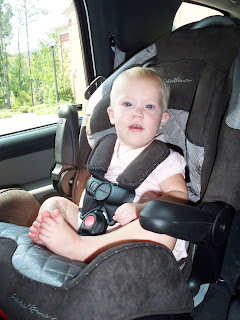 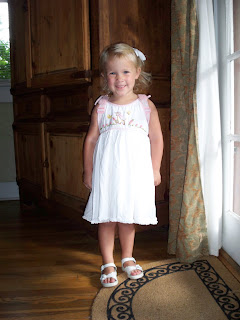 Change is hard, and we’ve been having some around here. This is a picture of Pace on her first day of school a few weeks ago. I’d picked out this dress the night before. We’d eaten breakfast, packed her lunch, and in all of our excitement were ready to walk out the door an hour before it was time. If you don’t know, it’s not fun to have a 2 year old pumped up about doing something and then have to tell them over and over they’ll have to wait. I agreed that we could go outside and play to help the time pass, even in her sweet little white dress. As she was swinging in the neighbors swing (like superman)…a bird took a big fat crap on her back!! Now, her little white dress is purple, no other clothes are cute AND clean for her to wear, so I start scrubbing the back of her dress. Purple poo is bleeding on it like crazy and any sane person would have just taken the thing off and started over. Not me! For whatever reason it was in my mind that THIS was the first day of school outfit, and I couldn’t have her going in and making a bad first impression in play clothes.
Eventually, I got the nast (mostly) out, loaded the girls in the car, and managed to go from one hour early to 10 minutes late for the first day. As we walked in, Pace’s eyes wandered over to her class (and teacher) from the year before. Now, we’ve been building up the new class and new teacher at our house for a solid month, but suddenly all thoughts of anything new being good were thrown out the window. She ran up to Mrs. Denise (last year’s teacher), clung to her leg like a vice and begged to come to her class. Meanwhile, Mrs. Debbie (the new teacher) is doing her best to sell her charms and both teachers are inquisitive as to why she’s soaking wet. So, I proceeded to try and explain about the bird poo situation while also holding the very amused Mary Aplin and dragging the very distraught Pace into the proper room. The “Hold me, Mommy, HOLD me!” chant has begun from the damp child, and I give in. One hip is holding Mary Aplin, the other hip is holding Pace, and my mind is cursing the high wedge shoes I’d chosen to try and make my own good impression on the first day. Pace has broken into tears at this point, and I have moved from cajoling to stern, “Pace Maddox, you stop that crying or we’re going to the bathroom and we’re going to have a LONG talk. This is Mrs. Debbie, you’ve been so excited about her, and you better get down right now and show her how sweet you can be.”
Poor Mrs. Debbie, who was still trying hard to win Pace’s affection, reached out to pry her from my arms (while not actually making contact with the wet poo poo back of her dress) and what did my daughter do? She grabbed onto my ponytail and wouldn’t let go. I was being drug towards Mrs. Debbie’s arms by my HAIR, when the school director came in and told me to just go, she would call my cell phone in ten minutes if Pace hadn’t calmed down. “Don’t worry!” she assured me. “All the other kids did the same thing on their first day.” Thanks for the encouragement, but I’d be willing to bet all the other Mom’s didn’t get their hair ripped out by the roots. I was humiliated. I was one of those Moms who don’t have control over their children in public.
I went home, and a few minutes later got a phone call telling me that Pace had cheered up almost immediately after I left. Then, four extremely short hours later :), I went to pick her up, and y’all the child was dressed like a princess, dancing around the table with other children. I stood with a group of other Moms to watch the cuteness. She saw me, started shooing me away with her hand as she said, “No Mommy, I don’t WANT to go home YET!” What a change. Embarrassed when I dropped her off because she clung to me like we’d never been apart a moment in her life. Embarrassed when I picked her up because she acted like she could care less about going home with me. 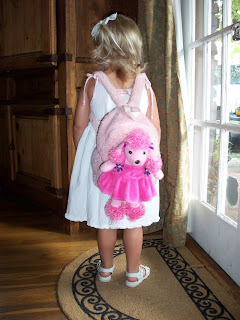 This one had a little change this past week as well (I don’t know what is going on with blogspot, but it will NOT let me move that picture at the top of the page down here. Sorry). We moved up from the rear facing pumpkin seat, to the forward facing car seat. It is such a fun change, to look back and see her grinning face instead of the top of her head, but I cried when I took that pumpkin seat out. I, like Pace, may love the change after it happens, but its hard to make that transition. So, these are two areas in our life that are changing. There are others as well…others that are even more difficult. I have embarrassed myself, not pulling anybody’s hair out, but wanting to 🙂 But, just like God brought Pace great joy–even dancing–from her big change; I trust that he will do the same for me.