Published by Abby on May 7, 2009. Filed under Books and Writing 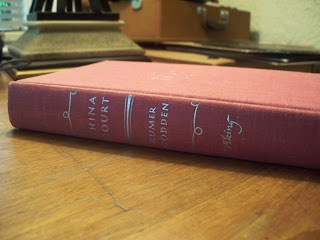 I am only 74 pages into a book, and I can already tell it is going to be one of my lifetime favorites. It is China Court by Rumer Godden, and it has nothing to do with the Orient (if you are like me and completely turned off by the title, thinking that you are about to be immersed in Chinese Culture). The book is about the generations of a family who have all lived and loved and died in this house–China Court. I bet you’ll never guess where the house is located :)–oh wow, that’s a change, THE ENGLISH COUNTRYSIDE in the 1800’s to mid-1900’s.

If I could place an order to heaven for the kind of writer I’d like to be, I think I would be Rumer Godden. Her words are so rich, and thoughts so provoking, that I want to savor every bite. She creates the sights, and sounds, and smells, and touches of home so perfectly delicious that you will want to cry. But (at least so far) it’s never too much. I never find myself skimming over her descriptions to get to the meat of the plot, because her words are not over-flowered, they are simple. She takes simple words and makes them beautiful:
“If he had seen me at any other time he would never have liked me,” said Tracy afterwards. “He wouldn’t have let himself like me,” and it was true that he would not have spoken to her if he had seen her as she had first appeared to Cecily that early morning; in her traveling suit and matching coat she would have been like any of the girls in the world he had run away from–St. Omerland he called it now–and instinctively he would have run away from her too, but now she had tied one of Cecily’s aprons round herself and was getting breakfast….As he saw her now she was standing at the table slicing bread, too absorbed to see him. Behind her the range was well alight, making the gentle rushing sound of a fire drawing well up the chimney; the front was open and the glow filled the room. There was a smell of breakfast, and Peter felt almost faint remembering the mug of coffee, half warmed and full of grits, that he had snatched before milking,…but the smell that assailed him now was of coffee, fresh and hot, of milk simmering, of bacon and fresh toast, of warmed china.
Am I crazy to think something as simple as that beautiful? Do the words “warmed china” make anybody else’s heart melt at the thought of what a snug kitchen that must be? Does anybody else want their husbands to walk in the door and be caught up in raptures of thankfulness at the sight of you slicing fresh bread in a simple apron? I just love her writing, and I can’t express why.
Then there was this paragraph on hands that actually made me cry. I have a thing for hands, always have. One of my most vivid memories from “the drama” of mine and Jeremiah’s dating relationship has to do with the sight of his hands–those hands calloused from throwing hay bales and picking his guitar, with short nail beds from his dirty biting habit, and so much bigger than mine. Hands that had cupped my face and swallowed my own inside his as we walked through the woods at night. I saw THOSE hands, resting casually on his light bluejeans, on top of his knees, and those knees were bumping playfully up against the knees of a girl he had brought home with him from Montana–because he wasn’t sure that SHE was not “the one” for him. It wasn’t the sight of the two of them together on a haybale at The Maddox barn Bible study that sent me over the edge, it was the sight of his hands so close to hers and the terrifying thought that they might grab hold of her as well.
That is the first time I recollect hands representing a whole person to me, but since then I could list a dozen times that the remembrance of someone’s hands that I love has brought me to my knees. The last thing I did before I left Mom, was touch her hands. Wanting to blaze in my mind one last time, the sensation of feeling warmth from them. Anyway, I came in here this morning to tell you how much I love a book, and I’ve worked myself all into a tizzy. I’ll just leave you with Rumer Godden’s paragraph on hands:
“And we have been here all that time?”
“The house has never changed hands.”
“Hands?” asks Tracy, startled.
“Yes, hands.” Hands to direct, to sign letters and write cheques for bills, to put a latchkey in the lock and bolt the doors at night. Other hands that hold keys too, but household keys; write notes that are dispatched,…These hands often write recipes: “Our apple jelly with lavender and rosemary flavouring.” “Our duck with cherries.” “Our velvet cream.” The recipe book is still in the kitchen and Tracy’s Great-Great-Grandmother Adza’s velvet cream is still made on rare and especial occassions. These lady-like hands sew and knit; garden–but in gloves–play whist, leave cards, rub ointment on bruises; smooth hair back from hot foreheads, spank. There are younger, slimmer hands that embroider, and do the flowers, play the piano, cut the pages of novels, sketch–“and twiddle their thumbs,” says Eliza. There are small hands, very often dirty, that pry and poke, into cupboards, workbaskets, jam-pots; make mud pies and cut out paper dolls;…There are humbler deft hands that sweep and dust, wash china and clothes and linen; iron, mend, sew, cook, bake, make fires and beds, sound gongs, carry trays; and rougher hands still that chop wood, clean shoes, groom, dig, wash the motorcar, mow the lawn, “but all our hands,” says Mrs. Quin.
“All belonging.” And Tracy gives a sigh of content.