Published by Abby on December 7, 2006. Filed under Life and Laughter 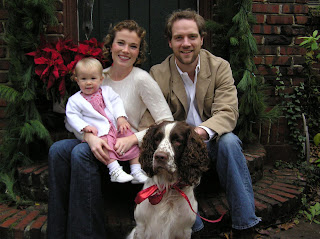 Here we are, all smiling warmly into the camera…. Actually, we are in a fight and I am just about to lose it. Here’s the gist: I would have been happy to do a Christmas card of just Pace. I mean isn’t that what you do when you have children? Graciously remove yourself from all photos as life, like pictures, becomes all about them? Jeremiah, however, would NOT have a Christmas card without the whole family–ESPECIALLY Buckley. Now, if any of you have ever taken pictures with dogs and babies you know that getting everybody happy and looking at the camera at the same time takes something close to a miracle. But, he really wanted it, and I agreed to try.

So, my friend/neighbor Lauren agrees to come over and take the picture for us. The background on that story is that she is having a HECTIC week. A week that would have given me a nervous breakdown long ago. A week that also includes several failed attempts at making her own Christmas card pictures, and I know that she is burned out on pictures period. She, however, is one of those people with a sweet disposition who would never say “no” to anything you ask of her, and she comes, with a good attitude and a baby of her own in tow, to take our impossible picture.

We’re on the steps. I am trying to make Pace smile and look at the camera, and Lauren, understanding what any mother would want for her Christmas card picture, is calling Pace’s name and trying to make funny faces and noises at her while still taking a quality picture. What, you may wonder, is Jeremiah doing during this raucous? He is constantly saying, “No, Lauren, you’ve GOT to call Buck! He’s not going to look at the camera unless you CALL him!” Over and over he makes this same statement, and I feel my blood getting hotter and hotter with every cry. I try to ask (and I am not going to lie and say it was in a nice voice) if we could take a few pictures without Buckley as well, so that we can focus on Pace looking at the camera for a minute. However, these requests are basically ignored and the Buckley chant continues. I need to be fair and say that in Jeremiah’s mind, our neighbor was giving us 10 or 15 minutes to snap a picture, and, since I was holding Pace, he was just trying to do his job and get Buckley to look at the camera. After all he couldn’t control Pace if I was holding her. He was just trying to be helpful and didn’t understand why on earth I was getting my panties in such a wad.

This saga goes on, with me feeling the whole time like we need to hurry up because poor Lauren shouldn’t be having to do this…but the question I’ve been wanting to pose is this: Is there a correct way to respond to someone in anger? We know that Jesus got mad, and he threw things around the temple, but that was a jealous anger for his God, and not a tirade over a Christmas card picture. To be honest with you all, I have a tendency to get too mad too fast. When this happens, I also have a tendency to talk down to my husband…. I know it is absolutely horrible, and I have been praying about it and working on it for literally years now, but it still happens. Is our true nature revealed when we are under pressure, or are we acting out in a way that is not who we are because the pressure is there? Either way, I need to learn a new way to respond when I get mad. Obviously it hurts and infuriates my husband, and he really doesn’t deserve to be treated that way–even though it is usually him who is wrong 🙂 I am just asking for prayer. Prayer that I won’t get mad over things that don’t matter, and prayer that when I do get angry I won’t feel like I have the right to talk down to my husband. In the meantime, I hope you all enjoy our Christmas card picture, ’cause it came at a price 🙂

BTW, this isn’t the picture on our card. You’ll have to hold your breath and wait for that one! Also, I changed the settings so that anyone (not only google users) can post a comment. So, if you’ve just been dying to respond but didn’t want to take the time to become a google user, then today is your lucky day 🙂