Published by Abby on August 15, 2008. Filed under Love and Marriage-Children 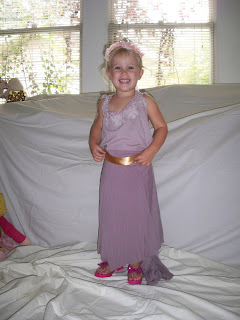 As a stay-at-home mom, there are days I realize, “Wow, I have not really played with my children in a while.” Its easy to get caught up in handing them a marker and some paper, so that I can fold another load of laundry. Pointing her to her toy chest so that I can sweep the kitchen. Or, heaven forbid, turning on Sesame Street so that I can blog :). This will work for a time, but soon you start to notice that they have run out of steam and need some new fodder for their little imaginations. So, Monday morning I decided to give myself over to make-believe with my 2 year old.
I sat down on the floor with Mary Aplin in my lap and said, “I will do anything you want today! So what will it be?”
“I want to have a ball!!!” she immediately replied. I must admit I didn’t see that one coming, but I looked up into my imagination, begging my mind to bring back memories of childhood balls and what they might require. First, we made this list. I asked Pace what things she felt we needed, and with a little prodding on my part this is what we came up with. 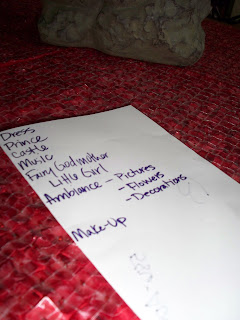 Next, we decorated. I gave her some watercolors and told her to paint a picture of twinkling lights and dancing people (I just didn’t have it in me to dig the Christmas lights out of the basement, give me a break) so that we could hang it on the wall. We covered part of the study in white sheets, in an attempt to make it feel like she was dancing on clouds. We invited her “friends” from the toy chest, being sure that the Evil Stepmother, Anastasia, and Drizella were all in attendance. We picked out the perfect ball music (my Pride and Prejudice soundtrack), practiced dancing, and attempted to learn what a curtsy was. We decorated with flowers and I tried to teach her the meaning of the word ambiance. 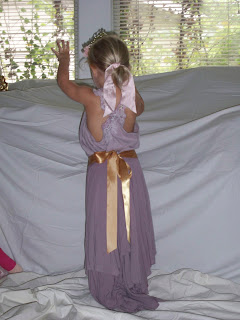 Then came the really fun part–the make-over! She was insistent that she needed a PURPLE dress, and since there are no purple dress-up gowns at our house and a call to the neighbors produced no more hope of a purple gown, I dug into my own closet and found what, with a few strategically placed pins and one gold ribbon turned out to be the perfect ball gown. Then came the make-up and how to wear your hair when wearing a crown.

We felt pretty prepared for our ball, but there were still two people missing…the fairy godmother, and MOST importantly Prince Charming. One of those was pretty easy to solve. I put on a white dress, Pace’s fairy wings and started carrying a wand around with me. She seemed pretty happy with this, as long as I wore the fanciest shoes I owned. Not sure where she got that…Did the fairy godmother even wear shoes? Anyway, she’d been fretting about the Prince all morning. She got a little paint on her fingers while she was painting those twinkling lights and she ran to me saying, “Mommy, get the soap! We can’t let Prince Charming see me like this!” Then, I nearly poked her eye out while applying her mascara because she went into raptures about how she was in love with the Prince and he was in love with her too.
You can see I wasn’t going to get away with handing her a Ken doll and telling her the Prince had arrived. So I called Ashley and asked her if Noah would be willing to come to our ball as Prince Charming. She laughingly said that she couldn’t promise anything, but they would try. A few minutes later, Cinderella was waiting expectantly at the door for her Prince to arrive. The music was playing softly in the background and the ballroom was waiting, filled with friends. When we opened the door, Noah took one look at Pace and turned around and ran in the other direction. There were a few seconds where I thought my beautiful Princess was going to be stood up at her own ball. But suddenly Noah came running back through the door and stopped right in front of Pace. When I looked down, he was holding a bouquet of leaves from our Camellia bush. What a man! What kind of training is his Mama doing, that he knew instinctively upon seeing a woman decked to the nines that he dare not approach her empty handed! That shows a lot of promise in my book 🙂 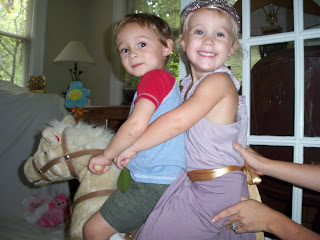 This gallant steed was awaiting our fair Prince so that he could take his date to the ball in style. He was happy to oblige us in this area, but I’m afraid that, like all men, the allure of nature was greater than the allure of stiff dancing. And no matter how Cinderella pleaded, we just could not get him off that horse. So in the end, Cinderella didn’t get to dance with Prince Charming at her ball (You should know that she called Noah, Charming the whole time he was here, as though that was logically the Prince’s name), but she did get to dance with another, tinier prince. Noah’s brother Gavin may only be 7 months old, but he could dance well with a little help from his Mama.

We had a great morning, and Pace has been playing ball all by herself during this whole blog…Sometimes they just need some new fodder! (You see where Cinderella and the Prince ended up AFTER the ball. Oh dear.) 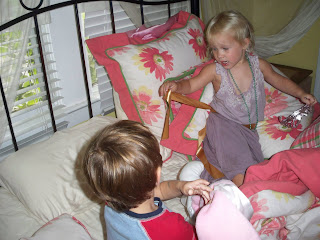