Published by Abby on January 22, 2007. Filed under Life and Laughter 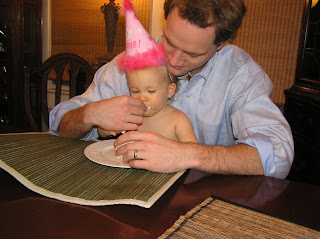 A few months ago, our pastor told Jeremiah that he had been nominated to be a deacon. His initial response was that he was greatly honored, but he just knew that his church attendance would be sporadic over the next 4 years. They don’t give you a lot of choice about working on Sundays as a resident. Brother Jimmy assured him that he understood, but that they wanted him anyway. I knew that somewhere in the Bible there were some requirements for deacons, or leaders in the church, and as the day of his ordination approached I found myself wondering, a bit nervously, if Jeremiah would meet the requirements (because of his strict work schedule). So, I plunged into the word, and found 1 Timothy 3:1-4

Here is a trustworthy saying: If anyone sets his heart on being an overseer, he desires a noble task. Now the overseer must be above reproach, the husband of but one wife, temperate, self-controlled, respectable, hospitable, able to teach, not given to drunkenness, not violent but gentle, not quarrelsome, not a lover of money. He must manage his own family well and see that his children obey him with proper respect.

There is more, but these represent the gist of the criteria. As I went through this daunting list I was at first relieved to see that church attendance was not even mentioned. Then, I started to dwell on each attribute, and I realized what an amazing husband God has blessed me with. Jeremiah truly personifies each trait. I find “above reproach” to be a bit daunting, but I if a person didn’t find that daunting then I think they would be unaware of God’s absolute perfection. I also must mention that he does sometimes become a bit of a purposeful aggravater (“not quarrelsome“) to me some evenings, but he is working on that 🙂 So, with a thankful heart, I began to welcome the approach of his ordination.

Brother Jimmy also asked if Jeremiah would sing at the ordination service, and I accepted for him. Jeremiah asked his Dad, Tommy, and Kirk to sing with him so they had a little quartet, two guitars, and were going to sing “All Creatures of our God and King.” In true Maddox form, the other three members of the quartet arrived at our house 45 minutes prior to the service and they commenced their first, and only, practice session. I was in the kitchen preparing dinner for after the service, and I thought they sounded really great. I love the sound of voices in harmony, and the deep richness it creates. They all hit the first note of the first verse with ease, and sang through the song beautifully. Perhaps they should have gone on stage at church at that moment, completely cold, because when they sang after their 45 minutes of practice, the wheels fell off. Jeremiah said that he had another hymn stuck in his head as they mounted the stage and couldn’t remember the tune of the song they were about to sing to save his life. Tommy, who was the only person singing the melody, couldn’t remember the tune either. At some point, he actually quit playing the guitar altogether. I must also mention that these two, who couldn’t remember the tune, were also the two responsible for playing the tune on their guitars. Kirk, who could hear the discord and wasn’t sure what to do with it, was singing so quietly that I couldn’t hear him. That leaves Dr. Maddox, who was singing the base line perfectly. Unfortunately, the base line loses some of its splendor when not accompanied by a melody. When you add all this to the fact that nobody came in at the same time and there was some confusion about wording of the song…it got pretty ugly for the first 2 verses. I sat in the congregation trying to control the laughter creeping up inside me, as I watched their very serious, but very panic stricken faces. To their credit, by the 3rd verse they managed to get it together and it really did sound beautiful again. I think that the congregation got an idea of what they were aiming for by that last verse.

Later, came the laying on of hands. In my rather limited experience, I understood this ritual to be of a very serious nature. The man to be ordained reverently bows his head, while the seasoned veterans, who’ve already faced the storms that this newcomer is about to face, come and lay their hands on him and whisper fervent prayers of encouragement into his ear. Apparently, Jeremiah had a little different view of what this ritual should look like. As each deacon approached, Jeremiah looked up from his seat and smiled broadly enough to show those sweet dimples. He then reached out a welcoming hand for a hearty hand-shake, exchanging a few words, and ending with a very gracious “thank-you”. I’d like to name it “Jeremiah’s Meet-n-Greet.” At first I was horrified, and kept frantically motioning to him to close his eyes. He thought I was telling him he was supposed to cry, and just kept shrugging me off. After a while, my mom (who was sitting by me) leaned in and said, “He just looks so innocent up there!” and then we both started chuckling uncontrollably. What did it matter, really?

Besides this comedy of errors, there were some very touching moments. We saw a video of two deacons who were becoming Deacon Emeritus, and there were some pictures of their service that really touched my heart. One was a picture of our church ordaining its very first deacons over 50 years ago. Another was this retiring deacon standing in front of a Blue Bird bus and 30 something little children that he had picked up for church Sunday after Sunday back in the 60’s. Dr. Maddox stood up and spoke about what a great man Jeremiah had become, and thanked him for the honor of being his Dad. Another great moment was the sight of my Dad, who never had a son of his own, with his head bowed next to Jeremiah, who he now considers the son God had planned for him.

All in all, it was a very special and memorable night. We’ll remember it for its hilarity, for its touching nature, and for what is sure to be the beginning of a life of service to God’s church–his people.