Published by Abby on May 1, 2009. Filed under Life and Laughter 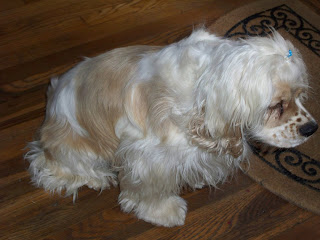 We haven’t talked about Locks in a while. He is probably the sweetest dog ever made–enduring being drug (literally) all over the house and neighborhood by my children and the neighborhood friends. He has gotten a lot better about having accidents in the house and, until THIS MORNING, I could say I could not even remember the last time I ushered in the day with a big pile-o-poop.

However, those gorgeous locks of his had gotten a bit–matted (I couldn’t even bear to take a picture of the matted Locks, so the one above is an old one). It wasn’t SO bad just to look at him, but if you tried to part all that hair, you discovered that there was no separating the strands.
He has seemed hot and miserable in this weather, and I found that I was dragging him by the leash half-way through our runs. It was time for a “summer cut.” On Wednesday morning, we had a playgroup at 10. I allotted 30 minutes for giving Lockety Locks a quick shave down and then thought we’d get showers and head to Melissa’s. THREE HOURS LATER I was still in the backyard with no signs of success ahead. 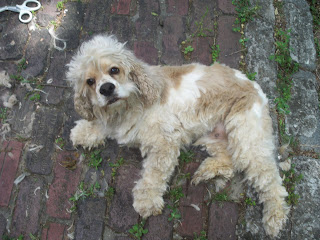 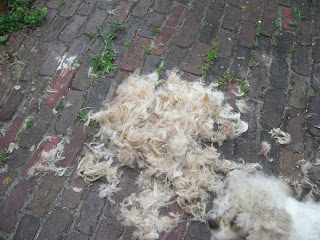 His undercoat was so thick, I couldn’t distinguish it from skin. I was terrified of nicking him (which I did four or five times before all was done), and in the matting was not only hair but hay and oats and twigs from his adventures throughout the farm this past weekend. IT WAS A NIGHTMARE! I thought I was just going to zip the razor over his fur like I do over Jeremiah’s hair. Oh no, not with that fur. I cut (with scissors). I shaved. I brushed (tugged really). I cut. I shaved. I brushed. I started out with these ideas of the kind of “hair style” I would give him, but by the end I just wanted it ALL off.

It took me a total of six working hours. That is not an exaggeration. What, you may ask, were my girls doing all that time. Well they started off playing in their PJs in the backyard. They stripped down to their underoos and played in the water hose, when the monotony started getting to them. AND THIS is how they ended up–butt naked, eating chocolate ice cream sandwiches. 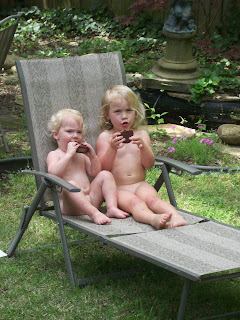 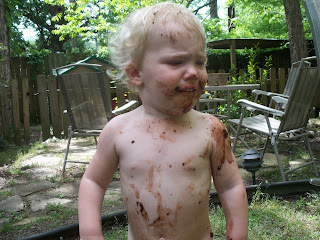 I must add that Locks was an angel. Can you imagine any dog sitting still for that long while you ripped his hair out, nicked his skin, and ran a hot, vibrating razor all over him. I love that little creature–and now he is acting so very cocky with his new cut. Pace said, “Mommy! Locks turned into a puppy!” And with HALF of a tall kitchen trash bag filled with his hair–decreasing his size by half–she’s right. 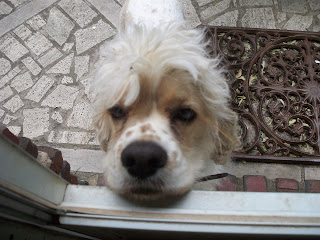 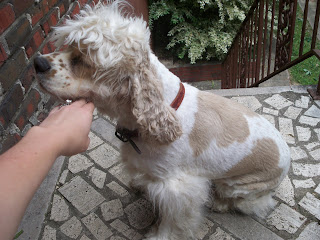