Published by Abby on February 24, 2007. Filed under Love and Marriage 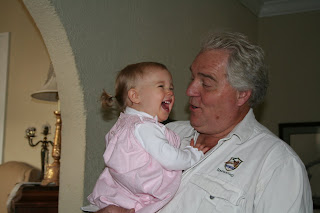 Since the beginning of our dating relationship, we have dreamed together of the land we would own one day. I remember one particular conversation, on the bus ride to his Sigma Nu formal, sharing our ideas about what made land beautiful. WATER, was one area where we were both in agreement. Whether it was a hot spring, a raging river, or a trickling creek, we both agreed that land was just not worth having if there was no water on it. These land dreams started, for me, as something that I would cherish more because it was Jeremiah’s ambition than my own. Then, a little over a year ago, we took a horseback ride on a sweet lady’s land (who is friends with Jeremiah’s family) and during that ride, owning land suddenly became MY dream too. That day we rode through open fields, picked our way through bramble-filled forests, and took in the quiet lakes, but most importantly we rode through the waters.

Mossy Creek, with its shallow trickling waters and white sand bed, runs for a couple of miles through the heart of this expanse of land. We (Dr. Maddox, Tommy, Josh, Ashley, Alex, Jeremiah, and me) started at the property line in the creek and were able to enjoy her beautiful land by horseback. There was not a face on the ride that could hold in its smile. There was such an invigorating energy that came from the horses as they galloped through the water, splashing each other and us. There was so much beauty in the way the sunlight turned the water into liquid gold around us. There was so much freedom in experiencing nature from the strong back of nature itself.

Then, we came to the point where Mossy Creek joins the Little Choctahatchee River. The white sand suddenly disappeared into the cool green current of the river. It seemed to be forever offering its humble contribution to the river’s mighty flow. A sort of deep swimming hole had formed at that point in the river, and we held the horses still and drank in the beauty of that spot. Through the fun and the beauty of that ride a year ago, a seed was planted in our (Jeremiah’s and mine) heats. A craving for a bit of land to call our own, and a flourish for that land in particular.

So, we have prayed over that land for the past year. There have been times when I have been so anxious that the land would sell before Jeremiah finished residency, I’ve thought my heart would burst. It may seem like a dramatic comparison, but it has really reminded me of the earnest prayers I used to offer to God over finding a husband. I dated one guy who I thought hung the moon. I had him on such a pedestal, that I told my Dad that I knew, if I didn’t marry THAT guy, I would spend the rest of my life knowing I had just settled for someone else. Oh, the dramas of a lovesick teenage girl! I know now that God must have been chuckling at the turn He had in store for me, because He had someone planned who was SO much more perfect for me in Jeremiah. He took the traits that I valued in the guy, magnified the good, softened the rough edges, and gave him a love that spoke perfectly to my heart. So, that is what I have tried to remind myself of during my anxious times about this land. I know the Lord intimately understands the desires of our hearts, and if this land I’ve worked myself into a fervor over isn’t what He has in store, then whatever land He does have will be even more perfectly suited for us.

This really isn’t the story I wanted to write about today, because Jeremiah and I re-visited that coveted land last week. However, this is getting long, so I think I’ll just name this Part 1 and tell the rest of the story later.

2 Responses to “Dreaming Together (Part 1)”