Published by Abby on February 26, 2007. Filed under Love and Marriage 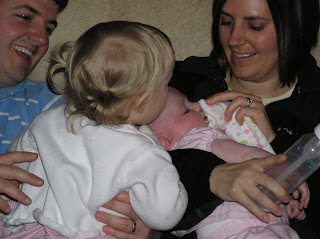 Last week Jeremiah and I went to Dothan for a couple of days during his recovery/week off. Pace was waiting for us there, because she took a little trip to her grandparent’s house while I took care of the family’s bigger baby 🙂 We decided to re-visit the land we’d been praying about and to go just the two of us this time. We called Mrs. Norma, and she very graciously agreed to allow us free reign over her land for the afternoon. On the way there, I asked Jeremiah if we could play pretend. Could we pretend, while we walked around, that the land really did belong to us? Jeremiah, who is used to my overactive imagination (and has succumbed more times than he would be willing to admit), agreed to DREAM about what we would do with the land one day but put his foot down on the idea of make-believe. I agreed, with a giggle, that it did sound silly but decided that it wouldn’t hurt anything if I played pretend on my own.

We pulled up to the door of Mrs. Norma’s ranch-style home. She had made coffee and laid out a spread of doughnuts, cookies, candy, and her favorite tangerine juice. We talked and laughed for over an hour. She has led and is still living a fascinating life, filled with books, travel, men, and learning more about the internet than her teenage grand-daughter 🙂 When we finally pried ourselves away from her cozy kitchen, we began our adventure.

We started in the open fields, where the soil still maintained that crunchy give beneath our feet, wrought from a lifetime of farming followed by many seasons of inactivity. As we sauntered from one field to the next, we found that each held its own beauty. One was open and expansive and seemed the perfect spot for a house with a huge yard. The next had a quiet pond, and seemed shielded from the road…maybe this would be the best spot for a house? THEN, we turned a corner and found ourselves in THE field. Closed in by thick trees on three sides, this spot called out, offering shelter and exclusiveness to the future home that dwells only in our minds at present. We quickly discovered that, by clearing the underbrush and smaller trees from one of the “walls” of our sanctuary, you would be able to see the Little Choctahatchee flowing right in front of our home. Investigation into another “wall” revealed a one-room hunters cabin, built on stilts. I asked Jeremiah if there was any greater boyhood dream that we could fulfill for our boys than offering them their own get-away cabin. He laughed and said we would make greater memories than that in that little cabin, since it would be the perfect place for our family to live while we built our house. I am still not sure if he was kidding about that, but I hope he was.

We finally tore ourselves away from the homestead field, and began the adventurous part of our excursion through the woods. While there is a lot to be said for seeing land on horseback, there is also something to be said for seeing it on foot. On foot, you can squeeze through tight brush, that you could never ask your horse to push through. You can stop and enjoy your surroundings, without constantly pulling back on your horse, who is invariably ready for the next phase of the ride. So, we saw places that we didn’t experience on that first trip. A cedar and white oak swamp, that stood eerily still and whispered its mesmerizing beauty. An expanse of forest where the trees formed a close-knit canopy, and didn’t allow any undergrowth to crop up from the ground. Areas of the river, 150 ft wide, where age-old trees stretched their branches from either side of the bank until they kissed, merging together their two sides. At one spot, we found a fresh-water spring gurgling up from the ground and sending a quiet stream to the river. We each stuck our hand (I a bit more timidly than Jeremiah) into the dark depths and felt the autonomy of its power. I am sure Jeremiah was dreaming of one day, but I was pretending that I was an explorer, seeing these beautiful sights with a virgin eye. I was being allowed the first glimpse at their beauty, God and I were the only two witnesses of this perfect creation in my mind.

Finally, our walk ended as the forest thinned out and we saw Mrs. Norma’s ranch-style home in the distance. My hair and sweater were full of leaves, my jeans had taken on a tear from the brambles, and my hands had not been spared from several stickers. My heart, however, was filled with excitement. It seemed that each step had revealed something even more beautiful along our journey, and I was constantly reminded of the way C.S. Lewis described heaven’s exponentially growing beauty in The Last Battle, “Farther up and farther in!” Jeremiah and I had spent an afternoon dreaming (or pretending :)) together, and I don’t think there is any exercise more healthy for a marriage than that. After all, that is one of the big differences between a marriage and other close friendships. In a marriage, you share a life and a future, and you get to dream your dreams together.

2 Responses to “Dreaming Together (Part 2)”