Published by Abby on September 21, 2008. Filed under Love and Marriage-Children 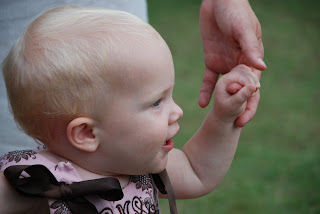 Talk about a big week for us over here at the Maddox house! Mary Aplin has taken her first step and said her first word…all in the same week!!!! And the first word is…drum roll please….DOG. Pronounced just as southern as can be: DAWWWG. We were at dinner two nights ago, all talking away with Mary Aplin munching in her high chair, when suddenly I noticed Pace and Mary Aplin were both giggling really hard and mocking each other. I started watching and noticed that Mapple Dapple was grunting a hard “D” sound. She was straining so much to pronounce that sound that her little face was turning bright red. Then, I noticed that it sounded like a little “awg” was out coming after that hard “D”. “Mary Aplin!” I squealed, “did you just say dog?!” As soon as she heard me repeat that hard earned word, she started clapping and smiling so hard I thought she might hurt herself. I ran down to the basement, grabbed a picture of our old, beloved and disappeared Buckley, and showed it to her.

Anyway, it’s gone on like this for a couple of days. She being very excited to pronounce her word, but me uncertain as to whether or not she really knew what she was talking about. I watched her look at the big Great Dane across the street and say it. And now, she has been consistently saying it about our picture of Buckley, so I’m claiming it. The first word! And here’s the video to prove it. (I’m so embarrassed that you’re seeing our wreck of a bedroom in this video, but that’s real life I guess.)
I have repeated all the normal first words: Mama, Dada, Sister, Pace, Bottle, Milk, Bite– over and over again. We don’t even have a dog here anymore, but she lights up like a Christmas tree whenever she sees one. Squealing with delight as they lick her face to pieces. And the bizarre thing is that “Dog” was Pace’s first word too!! When I told my Dad he said that maybe his grand-daughters would be Veterinarians like him, since obviously none of his daughters were going to be 🙂 I don’t know, it could also be that my in-laws love dogs in a huge way, and maybe they just inherited that love. Whatever the reason, we’ll take it!
On a more serious note, Friday night, after Mary Aplin first discovered she could communicate with us, she also decided she couldn’t sleep. On her THIRD wake-up, I gave up and just turned on the light in her room to hang out for a while. She immediately started straining with that hard “D”aaawwwg, and rejoicing triumphantly as I repeated it back to her. I was so filled with joy and wonder, watching my little person discover something new, something that would be a stepping stone for the rest of her life. The magnanimity of it all sort of overwhelmed me, and I thanked God for the reward of being a mother and getting to share something so special with her. After all these months of saying words slowly and coaxing her to try them too, the reward of seeing her understand is just hard to explain. Then in my sheer happiness, I started sobbing. I’m sure Mary Aplin was quite confused, but I just thought of my own Mom…how she must have felt this same way about me some 26 years ago. I felt a bond with her and a gratefulness for her, that you can’t understand, as a child, until you become a parent yourself. I wish I could tell her. Thanks Mom, for teaching me and thanks Mapple Dapple, for letting me share these first moments with you.