FROM Glory TO Glory

Published by Abby on December 19, 2007. Filed under Faith and my Mom 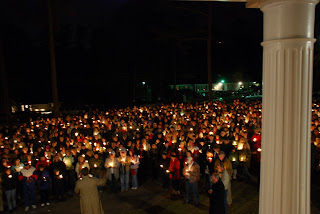 The picture you are looking at is the last physical vision my Mom had on this earth. A host of people flooding our front yard (and down a side street that you can’t see), holding candles, singing carols, and praying for her. After smiling and waving down to these friends, she walked to her bed, laid down, closed her eyes and slipped into another state of consciousness. The next vision she saw was heaven. Mom was permanently healed yesterday morning around 5:45. I was praying and believing that I would be writing on this blog to report an earthly healing to you all. However, that was not God’s plan. All I know to say is that we misunderstood, because I know that God is not a man that He could lie (Numbers 23:19).

I have been through many stages over the past weeks. Extreme hope, blindingly painful sadness, numbness, joy, and dream walking. However, yesterday morning I was consumed with an all-encompassing peace. I crept up into Mom and Dad’s room around 4:30 yesterday morning (after feeding Mary Aplin). I watched Mom’s strained breathing and held Dad’s hand for about 30 minutes. Then, I kissed her cheek and whispered, “I love you so bad” (a term that Pace has coined) into her ear. I went downstairs and spent another half hour weeping bitterly to Jeremiah about all of the “last times”, and then God wrapped me in peace. We had both been lying there quietly for about 5 minutes when Dad walked in and said, “Your Mom’s gone on to glory.”
The next hour seems like a dream now, but at the time it was the first moment I had felt real in a long time. I believe God brought that peace to me at the same time he was wrapping her into His arms. I held her hand, because I wanted to feel warmth from her one last time, and we sang “Our God is an Awesome God,” because He is. We prayed, and we read from her favorite devotional “Streams in the Desert.” It was a message delivered directly to us (if you have it, then check out Dec. 19th). Dr. Edwin came to pronounce her and he prayed with us as well. He shared several words with us, but one thing that really stuck out was him saying that God did not take her until ALL of us were ready. I had really struggled with that issue. Why, if He was going to take her home, had he tarried and left her in pain? I had thought a lot about the cross–the fact that he had allowed his own son to suffer so why did I expect my Mom to be treated differently. I had thought about Him helping me to realize just what suffering was, and what my sins had cost. I had not, however, thought of her suffering as an act of mercy for me. He slowly brought us all to a place where we wanted her to go. Unless He was going to heal her to wholeness instantly, we didn’t want her to stay here any longer. For me, I don’t think I got there until the moment she left.
So, as we sat there on her bed I looked at my husband, my Dad, my sisters, and I could fill my lungs with cool air and feel real again. The waiting was over. God had finally answered our question, and even though the answer wasn’t what we expected, it is the best. I tentatively admitted my supernatural sense of peace to the group. Afraid it might seem callous. But everyone’s faces lit up and they admitted feeling the same way. I know there are still going to be hard days. There have already been moments that made me painfully catch my breath…but they are just moments. My overall sense is peace, and I know it is from Him. I can’t imagine a better send-off from this life than the one He gave her. And if that’s how she left earth, I can only imagine the glory she was welcomed in to.

50 Responses to “FROM Glory TO Glory”