From the Mouths of Babes

Published by Abby on April 18, 2008. Filed under Love and Marriage-Children 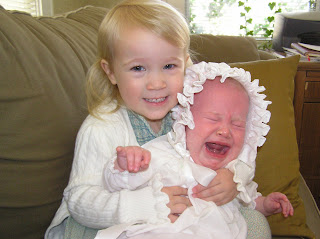 I don’t even know what the rest of that quote is supposed to say. Maybe that is the whole thing, “From the mouths of babes…,” and we’re just all supposed to assume that that means that some really amazing things come out of their mouths. I don’t feel like googling it, but if anybody knows the rest, then let me know. Mary Aplin had something new come out of her mouth this weekend…She said MAMA!!! Of course, she had no idea what she was saying, but it was amazingly sweet to hear it anyway. She usually chants it while she’s crying. I get so tickled and excited, that she stops crying, looks at my funny, smiles back, and then starts wailing again. Anyway, I was reading one of your blogs, and you talked about your little girl saying sweet things about Jesus coming to live in her heart. It was precious and reminded me that I keep meaning to blog about the things Pace has been saying about her Bebe (that’s Mom).

Jeremiah and I have both talked about how when kids say something, it suddenly seems prophetic. Just last weekend Pace told me she was going to meet her new best friend Georgia tomorrow (that is what my friend Lauren is planning to name her little girl), and I called Lauren (who is due any second) all excited–like that really meant something. Pace has said three different things, so far, about Mom that seem eerily true. They just came completely out of nowhere.

1) I asked her what she thought Bebe was doing in heaven, and she looked at me and said very matter-of-factly, “She’s dancing in the grass.”

2) She asked me if Bebe was wearing pajamas in heaven, and I told her I wasn’t sure. Then she said, “No, she’s wearing a party dress.”

3) Another day, I was asking her if Bebe was still wearing her party dress, and she said, “She’s wearing a CROWN Mommy!”

There are also little things she says that help me know that she really remembers Mom, and not just what we say about Mom. That’s one of my biggest fears, that she’ll just forget.

1) One day, I was trying to make her wear her pink tennis shoes and she wanted to wear her Crocs. In the middle of our little debate she yelled, “But Bebe didn’t wear tennis shoes, she wore flip-flops!” That was so true. Mom almost always had on flip-flops.

2) Every time she gets out of the bath tub at my parents house in Dothan, she runs into my parents room to get her lotion and pajama’s on while screaming, “Bebe’s Room!” Then she walks over to Mom’s side of the bed, peers over the top (like she’s just checking to make sure she’s not there), and then she looks at the night stand and asks, “Where’s Bebe’s medicine?”

4) Tonight, I was tucking her in and I told her we were going to Dothan tomorrow. After the conversation above she said, “Last time Bebe was here at my house she came and woke me up. She had a necklace on with her dress, and she let me play with it!” I just started balling. She’s so right! I didn’t even remember that until she said it.

I am very grateful that God seems to be etching Mom’s memory on her little heart, and I hope she is a prophetess….It seems very likely to me that Bebe is up there, wearing a party dress and a crown, dancing in the grass.

14 Responses to “From the Mouths of Babes”