Published by Abby on September 15, 2011. Filed under Faith and my Mom 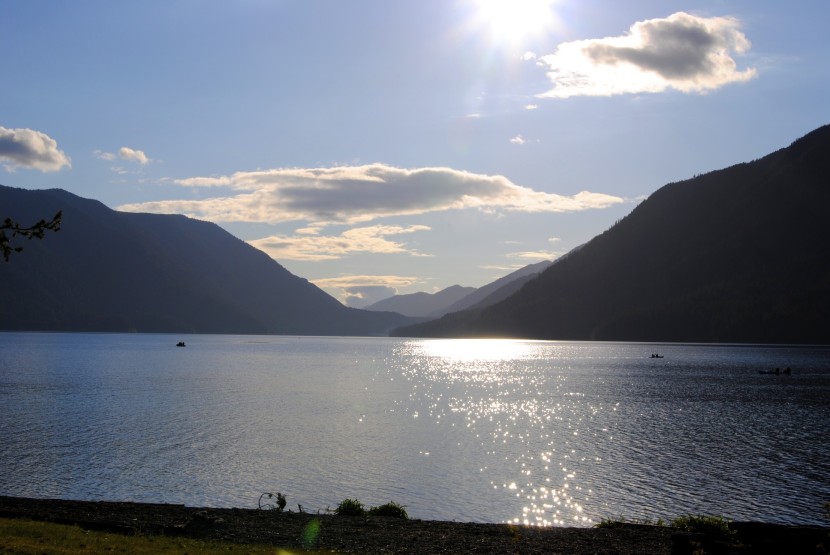 I just went back and re-read the post  that I wrote as our life in Washington began:

As we entered Washington, I was happy to see how green it was. That part, at least, felt a little more like home. I don’t think Jeremiah agreed with me, but the mountains looked even bigger here. In Wyoming and Montana they went on and on; in Idaho they were crowded and tall, but in Washington–they looked like big green giants. Wide, tall, some snow-capped, but all covered in lush evergreens. They seemed to echo the overall feeling inside our little car–intimidation. This is where we live now, I kept telling myself. It’s breathtakingly beautiful…and frightening. Jeremiah asked if I wanted to pray, and we did. For a long time, really. It felt like something big was happening, beginning, but neither of us knew what it was. All of life is divided up into segments, but very few of those segments are a single, concentrated year. I believe God has brought us to Seattle for a reason. In Jeremiah’s understanding it was for the best spine training he could get. For me, it seemed like a chance to finally write. But, I’m not sure either of those obvious purposes is the true purpose. I know it sounds strange, but as we held hands and wove between those big green giants we prayed we wouldn’t miss whatever it was God was trying to do with our lives. I remember those feelings so well, especially as we stand before another new beginning–that doesn’t seem quite so mysterious.  I remember wondering, then, what this post–after it was all said and done–would say?  What was it that Jeremiah and I both felt looming before us as we wove through the Cascade mountains?  There were the obvious things–spine training, time to write, growth as a little family on our own–but we both knew there was more, something else besides the obvious. It was different for both of us.  I don’t want to share too much of Jeremiah’s heart, although I hope that one day I’ll get him back on here to do that himself, but I will say that God brought him through some tough things over the past year.  It was a threshing season for him–a time for sifting through the chaff–and a threshing is never fun while you’re experiencing it.  Today, however, even Jeremiah is beginning to see the beauty that’s been revealed through it all. For me…how to be concise?  I think I can narrow it down to three primary things.  First, this year in Seattle gave me a confidence that I didn’t know I needed.  Jeremiah took a year off between college and medical school, to move to Montana and see if he could live life on his own–support himself and carve out a life without the influence of family or friends.  I was a Freshman in college during that time of his life, and I sort of shrugged it off as some type of “guy thing” that I didn’t understand.  Now, I’ve gotten to experience the same thing as a 29-year-old lady.  It was invigorating to learn to navigate a big city, far away from home, and to make friends all on my own.  I wasn’t anybody’s daughter, or daughter-in-law, or friend of anybody’s friend–I was just Abby, Jeremiah’s wife, Pace and Mary Aplin’s mom.  And, somehow or other, I still made some truly wonderful friends and lived a full life.  I didn’t know I needed that confidence…but I did. Secondly, God confirmed a calling in my heart that was there before but not totally apparent.  I want to minister to women–other wives and mothers that struggle with the same everyday tribulations that I find in my own life.  I love to love them, to share their burdens and be honest about my own, to make them feel special…I still don’t know exactly how that calling is going to manifest itself in my life over the next few years, but I know He has given me a heart for it.  This realization came first through recognizing my own need for fellowship.  I am an introvert by nature–at least, I am strengthened by time alone.  However, moving to Seattle and feeling like I had no fellowship, suddenly opened my eyes to my hunger for it.  I’d never had to be alone before, and I used to think that was what I wanted.  It’s not.  Periods of time away, for reflection–absolutely, but I started planning a Bible study for other women, in our home, very quickly after I’d had a little time to myself.  I REALLY need other women. Lastly, God confirmed another call on my life while I was in Seattle.  Yes, I want to minister to other women, but more importantly, He issued a priority list.  This may not sound life-altering to you, but for me it is just that.  He calls me first to be His, secondly to love, respect, and support my husband, and third to love and nurture my children.  I think that is the priority list for all Christian Moms, and while I don’t always (or even usually) live that way, I at least knew those three before.  The question for me lies in what is seated in priority seat number four?  There are lots of wonderful things crowding around, asking to be listed there: ministering to other women, being involved in our church, my own health/fitness, Bible studies, charities and volunteering galore, becoming a better cook…We all have a list, don’t we?  But we also have a finite amount of time and energy, and we can give so much to our lower priorities that our energy (and happiness) falls away, leaving our solid first three to feel the devastating effects of it.  Maybe we can do all things, but we cannot do all things well. And so, I needed a number four.  What is His primary calling on my life outside of being His, a wife, and a mom?… … …He has called me to write.  To be a writer. It is terrifying for me to write those two sentences.  In the same way, it was a beautiful validation from Him to me about the dearest, hidden longing in my soul.  It is empowering to feel His blessing to say “No” to some good things in order to say “Yes” to something that I’ve tucked away as a guilty pleasure.  Not anymore!  He has told me its importance, it’s my number four!  And while there are so many wonderful things I learned while we were in Seattle and so much growth that happened in my life, to have Him tell me He wants me to write is the most exciting and fulfilling. I want to end our Washington posts with a little writing from the dearest person in my life.  Jeremiah says we wrote this song together, but really that is not true–and it sort of is.  It is one of the best nights we spent in Seattle: both of us sitting on the floor in front of a warm fire, sharing a tumbler of whiskey, a guitar in his lap, and a pile of notecards in mine.  The space needle and the Seattle skyline twinkled outside of our window as line after line fell from his lips.  I thrive on being allowed in to his creative side, to listening in amazement as it comes so naturally to him.  I would offer a clumsy phrase, he would tell me to write it down on a card.  I would write madly on his cards, to try and catch the thoughts before they dissipated.  Then we would sort through to find the treasures in the overflowing piles.  I am happy to tell you that not a single one of my cards made it to the keeping pile…but I must agree that it still felt a little like a song we had written together.  It certainly is a song that encompasses the time our family shared this past year.  {I have tried and tried to upload a rough recording that we made in the past, but I cannot get it to work.  Until I do, here are the words.}

Can you walk the hill of Capitol without making a smile?/ Then turn your feet to Broadway and give them a mile./ Can your paintbrush still thread through the eye of the Needle,/ When the day leaves nothing but clouds on your easel?

Have your skis made tracks in the woods of Mazama?/ Has your mind made light on the Wall of the Goat?/ Have you picked up a stone to cast in the Methow?/ Did you ever stop to wonder if maybe it would float?

Have your daughters been west to heights of Olympic?/ Have their hands reached up towards the face of their God?/ Have you listened to their voices raised up in laughter?/ Did they blend with the echoes where Natives once trod?