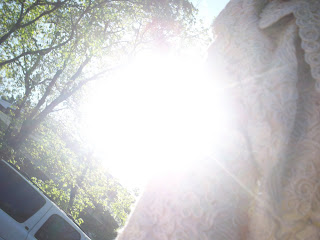 Have I mentioned on here before that I love Jesus? No, like really, I LOVE him–want to wrap my arms around Him, press my cheek against his chest, and squeeze as hard as I can–kind of love Him?
At church this past Sunday, our choir did a song sequence with a video playing behind them. I personally do not tend to get overly excited about the audio-visual aids and “tracts” at church–leaning more towards the the traditional. Has anybody else noticed that I was, perhaps, born in the wrong time period :)? But anyway, our choir performed BEAUTIFULLY on Easter. They were filled with joy and passion…you could tell that the words they were singing were resounding in their hearts. But then, there was this video, with little clips of Jesus walking through the streets, greeting the Marys or talking and laughing with his disciples, and I don’t know who this actor was, but he captured who I believe Jesus is more than any other movie or picture or painting I’ve ever seen. I had to fight tears every time his face came on the screen. I think it was because he was not stoic, and looking off into the heavens, or staring off in the distance like He is trying to bear the cursed sin he’s surrounded by. I just don’t think Jesus was like that. He “got us”–we humans–got us enough that he willingly DIED for us. Died because he wanted us to come back to His house for the rest of eternity. With a love like that, if you met Him on the road, do you think he would smile sweetly, nod in your direction, and then open his downstretched arms–like “Believe it or not, I accept you.” That’s what most Jesus pictures look like to me. But I don’t think he was like that. I think if (WHEN) I meet him on the road one day, He’s going to throw his arms open so wide that they’re going to stretch slightly above his head, he’s going to break into a huge grin and we’re both going to run so hard into each other’s arms that the collision would knock us out if we didn’t both have our immortal bodies. He’s going to smell like sunshine, and he is going to be solid and real and loving and laughing. Lots of laughing, because that’s what you do when you finally see somebody you love that you’ve been missing dreadfully. I can’t wait to see his face…Can you?
One more thing about the choir on Sunday. There was this one man who–like all the choir, including me, in the past– was looking the part of the serious, worshipful Christian up there in the choir loft. Then, they reached a particularly powerful chorus, and I saw him throw his head back, close his eyes, and open his mouth wide. He forgot himself, was just letting it out, and I wanted to cheer because I was feeling the same way. Looking at the “real” Jesus up there on the screen, I felt like my joy was swelling so big in my chest that I could have clambered up some invisible curtains, all the way into God’s presence. So there we are, me and the man from the choir, ready to head on up, when suddenly, he remembered. He remembered he was in front of the whole congregation in church and not standing in the midst of a heavenly host with Jesus standing right in front of him receiving his praises. His head snapped forward, his eyes opened and his whole head turned cherry red. It made me sad, but I understood. Even in my quiet little pew where nobody could see anything but the back of my head, I was embarrassed to let so much as a tear fall–much less raise my hands in the air and squeal at the top of my lungs like I wanted to. Aren’t you ready for heaven? When these stupid worldly insecurities will melt away and we’ll be able to praise him, all together, just like our hearts are longing to know how to do properly now? I am. 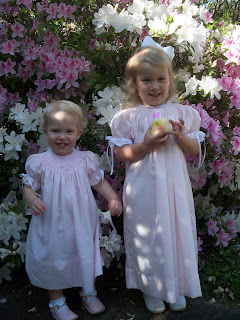 Can I just note, in all my worldliness–like any of you noticed or cared, that Mary Aplin outgrew her Sunday shoes when she woke up on Easter Sunday. Fit just fine last week, but that morning, when I put on the sweet little dresses with all their months of smocking and (Grandma) putting them together, those darned shoes wouldn’t even go halfway on her foot. So there she is, in the pink squeaky shoes that I COULD shove on to that fat little foot.

5 Responses to “He is Risen! He is Risen Indeed!”