I LOVE this Little Thing!

Published by Abby on July 24, 2008. Filed under Love and Marriage-Children 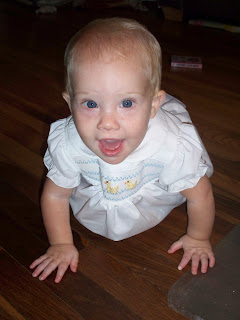 Mary Aplin is 9months old! It’s so hard to believe… She still hasn’t had her official check-up, but we did go in for her ear infection last week and she weighed 18 1/2 lbs and was around the 50th percentile for height and weight. Yeah!! All that nursing AND bottle feeding paid off. Just so you know, I gave up the nursing on her 9 month birthday. I had a cold (to put it mildly), I needed Jeremiah to give me some decent medication (besides Tylenol), and I just said OK I’m ready and so is she. There were no tears, no engorgement it was just time. Now let’s be honest, there’s a freedom that comes with going to the bottle. The bond of nursing is precious and sweet and a gift only a mother can give her little squeeze, but it also ties you to that little bundle and won’t let you go. So I loved it, but I am feeling some relief to be done.

Dapple DoYa, as Pace calls her now (really this child gets a new nickname almost every day), is cruising around, standing for longer and longer periods on her own, and is finally crawling the “right” way. There were a couple of months where Pace said, “Mommy, is Mary Aplin playing snake?” every time she started propelling herself across the floor. I feel like we’re still questioning whether or not she knows who she is talking about when she says Dada. Its definitely her favorite babble, but she also seems to say it a lot more when Jeremiah is in the room. Anyway, we aren’t claiming the first word quite yet, but she is focusing a lot on words now. I love when you start to see those little minds working! Now, when I say words slowly and point to what I’m saying, she watches my lips and is so still…just trying to absorb it. One day soon, I feel sure, we’re going to start hearing a few “words” coming back out.
Her smile is still always just below the surface–waiting to beam out at the next person who grins her way. That is, as long as Mommy is holding her and she doesn’t feel like you are about to take her out of my arms. This has been a new experience for me. Pace would reach her arms out to every stranger that approached me, happy to be held by one and all. Mary Aplin only wants me, and she clutches my arm like a vice whenever anybody walks toward us. I haven’t done anything different with the two of them. I let anybody who wanted to hold her as an infant, just like I did with Pace, but Mapple Dapple is simply a Momma’s girl. My friends keep telling me to enjoy it because it won’t last long, but I’m going to tell you that sometimes my arm gets tired. This new Independence of being able to explore on her own has made a HUGE difference in my day to day life. I can actually use 2 arms to make dinner every once in a while now, while she empties out the tupperware cabinet. I’ll take a mess that needs to be cleaned any day over the shoulder cramps and bicep aches of constant holding. 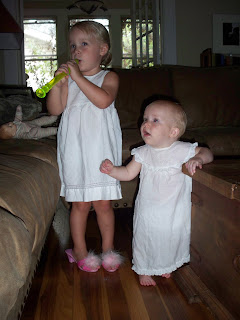 Pace adores her baby sister still…most of the time. Its weird how every once in a while she’ll just hit her, not hard, she doesn’t even seem to be aggravated, its like she wants to test the waters. Last week, my cruiser was holding on to the part of the door jamb where the hinges are as she moved along the wall. I was sewing (and half paying attention) when suddenly Pace just ran up and decided to slam the door. Ohh, it still makes my insides ache! Those seconds it took to run and get the door open seemed like minutes and those sweet chubby fingers had a deep dent. My skin is crawling. 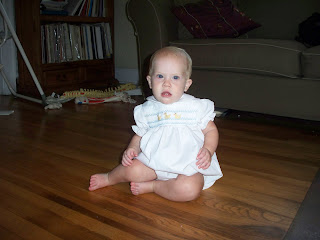 Mainly, things have finally gotten…easier. I had a moment with Pace (I can still see the little yellow onesie she was wearing and I was loading her in the car to go see Mom in the hospital) when she was 5 months old where I suddenly said, “Wow, this is FUN!” I had that moment yesterday when I was going to meet Mallory for lunch. Mary Aplin was wearing a little smocked sun dress, Pace was smiling at us from her car seat and I thought, “Wow, this is fun!” It took nine months to get there with two, but I feel like we’ve hit that milestone. Not that there hasn’t been tons of joy before now, but it’s more of knowing that I can “control” the girls when we get out of the house. Mary Aplin can feed herself food, or play with my straw, or… and I am not going to be standing beside the table eating with one hand while I bounce Mary Aplin and try to get her to calm down. That’s another thing about Dapples first eight or so months: She is either smiling so hard and so happy she can’t get her smile big enough OR she’s screaming mad. Not a whole lot of in between.
So, Mary Aplin is 9 months, she brings a lot of joy (and rapidly decreasing amounts of stress :)) to our home, and I love that little thing! 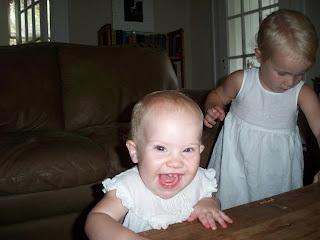 7 Responses to “I LOVE this Little Thing!”