If You Could See Me Now

Published by Abby on September 5, 2007. Filed under Love and Marriage-Children 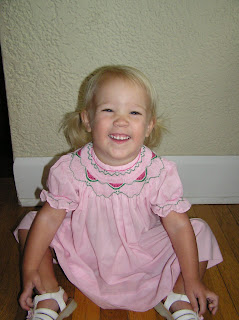 Guess what I’m doing. Sitting quietly in the library, after a morning of pumpkin spice latte and a good book at Starbucks, a little browsing at an antique linen and lace shop in Mountain Brook Village, and when I leave here…I’m meeting my parents for lunch. Thank you Jesus for “Mother’s Morning Out!” I went back and forth about whether or not to send Pace to MMO: the money, she needs interaction with other kids, this is my JOB, it sure would be nice to have a little break, the MONEY, does this mean that I am lazy, she will learn things that I don’t even know to teach her, THE MONEY, how will I even go to the grocery store once Mary Apline is born…on and on it went. I couldn’t decide. Then, finally, a week after all the other kids had already started, I decided to sign her up.

Since this is the only morning before Mary Apline’s arrival that I won’t have a doctor’s appointment (yes, it is already time to start going once a week–SCARY), I decided to soak it up. No guilt, I was going to do whatever I wanted to do, be out of the house, and not chide myself for all the things I could be getting done. Today was my fun day. The crazy thing was, that I couldn’t decide what I wanted to do. Lauren kept asking me what my plans were, and I told her I just didn’t know. I laid in bed last night (since I can’t sleep anyway) just thinking of all the possibilities. Think about it, what would you do with 4 guilt-free hours to spend however you like? But keep in mind that they are the only solid 4 guilt free hours that you’ll have for a long time. It was tough! You already know what I chose, and I feel like it has been pretty marvelous.

I have been telling Pace that she is going to school, and she’s been excited. We went and met her teacher and part of the class last week, and I could hardly get her to leave with me because she was so enamored with all of the new toys. I was a little sad as I packed her lunch and snack, and I was even more sad after tentatively leading her to the table with all the other little girls. However, I fought back the quick crying surge that swept over me by reminding myself of the quiet corner of Starbucks that was waiting for me 🙂 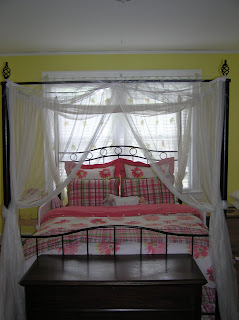 Sorry about the delay in the picture of the new room. The transition went really well and she has been happily sleeping and napping in her big girl room. It is fun to be able to lay beside her in bed to read a story, and she has learned to ask, “Lay with you a minute, Mommy?”, which I can rarely resist. Face to face on her pillow, we both close our eyes, and she has started this sweet gesture where she rubs my face absently with her little hand. It’s almost like she is trying to reassure herself that I am still there.

The first night in her room we made a big deal out of our new ritual. I videoed her bouncing around in the bed and telling the camera about her room. Then, Jeremiah read her a story (I’ve still got the camera rolling) and said her prayers. She then starts telling us to, “Close the door!” So we both kissed her (several times) and then did as she asked. As soon as it closed, however, she began to cry. 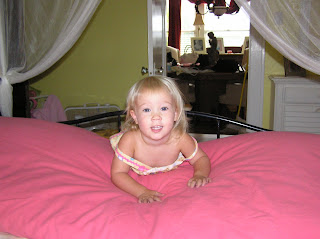 “Jeremiah, I think I should go back in and get her. We don’t want her to have a bad first experience in her new room,” I pleaded. Then, Jeremiah graciously reminded me that it had only been 30 seconds and we should probably give it a minute or two. I conceded and suddenly the crying stopped…I burst into tears.

“Are we really doing this?” Jeremiah asked sarcastically.

“You only get one first baby, and she’s not a baby anymore!” I wailed.

“Abby, she’s the same age she was last night when she went to sleep, she’s just in a different bed,” he calmly reminded me. (But I will add here that I could tell he was reassuring himself as much as me.) I, however, continued to press my lips tightly together and could do no more than nod my head. I was fine as long as she was crying. Then, I could tell myself that she really wasn’t old enough for this, and I could go tuck her back in her crib any second. The crying ending was something I was not prepared for.

“At least you know you’ve been there for every second,” Jeremiah quietly added. “At least you’re not crying because she is growing up and you feel like you’ve missed it. In fact, you’ve been here TOO much.” Now I have given him a hard time in the past for being the world’s worst comforter, but I must say that there was nothing he could have said to me that could have been more perfect.

“You’re right,” I sniffed as I bravely chucked myself into bed beside him. And I was so glad to be making a memory, that would seem silly and unnecessary to anyone else, with the only other person in the world who could love her as much as I do.

One Response to “If You Could See Me Now”