Published by Abby on January 11, 2009. Filed under Life and Laughter 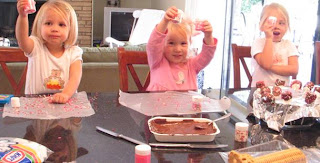 So I’ve been gone a long time…a really long time, and I don’t have a whole lot of an excuse. I came back to blogging with a bang a few days ago, but my husband and my Dad both thought it was too much of a bang, so I listened to the male majority and took it down. If you read my post (in the whole hour it was up) about the person who hurt my feelings, I would like to give you an update. I am scared to speak too soon…but I think I may finally FEEL forgiveness in my heart. Sound the Hallelujah Chorus!!! It did not come from writing that scathing blog, instead it came from talking to my Dad (after he told me to stop airing my dirty laundry on the world wide web:)) and realizing the SOURCE of all that anger. It wasn’t the woman as much as it was what she called me–a fake person.

Now I get to this blog and my point. I think that the reason I’ve had trouble forgiving the woman, and the reason I have compulsive honesty vomitorium on this blog, is the same. There are some issues from my past (that Dad helped me identify) that have led me to DESPISE dishonesty in others and myself. The woman called me fake–dishonest–which has long been THE VICE I’ve tried to run from. That’s why she hurt me so bad. Then, in fear lest any of you think my life too rose-colored or, even worse, fake and dishonest, I tell things on this blog that I don’t even want to share. It’s a compulsion. A need to tell it all, just in case you might think I’m a faker.
There’s something about finding the root of a problem, even if it doesn’t fix it, that is like a breath of fresh air. Knowing that I have a choice right now, to not list the details from my past that made me hate dishonesty, instead of HAVING to write them, feels like a weight off my shoulders. Will I start lying to you on here and painting everything in sepia tones…NO!!! I just hope I’ll feel the right to choose what I do and do not say. Whew! I don’t know if that made any sense, but I sure feel better.
As for our lives, Jeremiah is hopping all over the country interviewing for spine fellowships. I packed our little selves up and headed to Dothan where there are bunches of people just itching to share the load of these munchkins 🙂 My sweet friend Darby had us over to do the above craft with her girls. She fed us lunch, the girls played and shared like champions, and we even got some good conversation in in the mix. Thank you! Thank you Darby, Morgan, Paige and John Martin!
Hopefully it won’t be another month before we talk again. I’ve missed you 🙂