Published by Abby on July 21, 2008. Filed under Life and Laughter 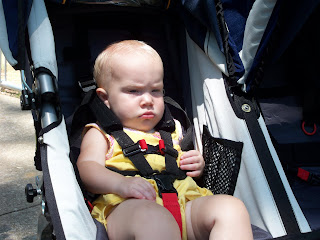 This past week, the phone rang, and it was a guy from the Birmingham news, asking if we wanted a free 1-month trial of the newspaper. I said, “No, Thank-you,” but of course he launched into his little spill about what a great deal the paper was and how marvelous it would be. I hate how they do that. How a salesman hears you say one thing, but just takes it as his opportunity to take away some more precious minutes of your day telling you about their product. So, determined not have my time stolen away against my will, I interrupted him, “We are blissfully ignorant about what is going on in the world, and I’d like for it to stay that way. So you see, we won’t be needing a paper.” I am not sure where that even came from, but it sure stopped him right in the middle of his sales pitch. He sat there for a couple of seconds and then said, “Would one month just be too much information for you?” Can you hear the sarcasm in his voice? So I said, “Actually it would, because its never just one month…Next thing I know, I’ll be getting a bill from ya’ll because I’ve inadvertently gone a week over my free month, then there’s the hassle of cancellation…Thank you, but again, no.” I hung up and laughed a little to myself thinking that that guy was probably going to tell all his buddies up at the newspaper sales center about the ignorant Southern girl he’d just talked to.
That night, I told Jeremiah my little story, and he looked at me with a very straight face and said, “Abby, that just isn’t true. You don’t want to be ignorant.”
“Yes I do!” I rebutted, “I know enough to be aware that our country is in a recession, we’re fighting a war, and that the media makes my skin crawl with the way they’re always bent towards the liberal agenda. I don’t want to pay to have it all splashed before my face every morning in a newspaper.”
“But Abby, you don’t want to be ignorant. You don’t want to sit at a dinner table and have to wear a blank stare during conversation you can’t follow because you have no clue what is going on in the world. You don’t want to be intimidated by people who understand politics.”
Those husbands, sometimes they just know us a little too well! I just wanted him to laugh at my interaction with the annoying salesman, and instead he had me feeling guilty about ignorance…and he was exactly right. There are a lot of areas in life that intimidate me, and instead of taking some time and initiative to educate myself, I just play the innocent little girl card and stay scared. Who am I, Paris Hilton? That certainly isn’t who I want to be, but that is precisely the way I had presented myself to that man from the newspaper.
So, there are lots of areas that I need some education. I have decided that I have had enough living in fear about things that I don’t understand. Here are a few of the areas I want to conquer:
Iraq: Why are they all killing each other over there, and do I really believe we should be interfering, or do I just say we should because that’s the Republican stance?
Afghanistan: Why are we fighting in Iraq if we still haven’t killed Osama bin Laden?
The Stock Market: My heart started beating fast just typing that. How does it work? What the heck is it? If it can send Martha to prison, how safe can it be?
The Bank: What is a CD? Do I need one? What about a Money Market Account?
Politics: I get that the Democrats have decided on Obama as their presidential candidate, but is McCain for sure the Republican candidate? If he is, why did nobody ask me if he was who I wanted as my candidate? I still love George W., even though our country does seem to be a wreck.
Gardening: When do I plant? When can I cut my bushes back and have them regrow in a relatively short period of time? How much do I water?
Taxes: If I mess up, and its an accident, can I still go to jail? Does the IRS really want me to save all my bills and RECEIPTS? If so, how long do I have to keep them? What all in our day to day lives do I need to keep track of because it is deductible?
Sewing: Oh yeah! I conquered this fear last week 🙂 No longer will I excuse myself in embarrassment if someone asks, “Did you make that? Is that a Lucy?” No longer will I look at a sewing machine and feel small because it knows more than I do! I am the proud creator of three and a half dresses…they may all be the same style…but we’re taking it a day at the time. Mainly, I no longer feel ignorant about it.
There’s my list. For all of you to see how little I know. Why didn’t they teach anything useful like this in college? Why don’t I have a reference book I can read to learn more? All that is past, but I feel like now, I can take one subject at a time and work until I get my questions answered. Then maybe I can go to a dinner party and not tune out you people who talk politics or the stock market or… I know that for me, ignorance has not been bliss, its just been fear. 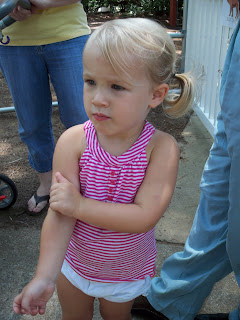 16 Responses to “Is Ignorance Really Bliss?”