Is This Normal Life?

Published by Abby on June 15, 2009. Filed under Love and Marriage 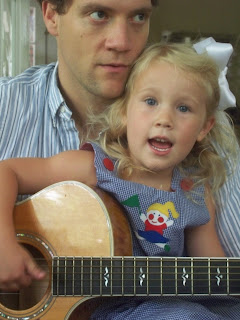 We have had such a sweet Sunday. I haven’t griped anymore (on the blog, don’t think I haven’t griped in real life) about Jeremiah’s trauma schedule, since the “Obama on Trauma” blog, but it’s been bad. Jeremiah is forever and always optimistic that next week is going to be better…it has to be…but so far his optimism has been dead off. HOWEVER, I promised myself I wouldn’t gripe on this blog either…

Today has been a marvellous day. One of those days that has gotten me wondering…”Is this what normal peoples’ lives look like?” Jeremiah had to go in and round for a few hours this morning, but he actually managed to squeeze in the pew beside me halfway through the singing in church. It was such a nice surprise! Then we went out to eat at Irondale Cafe, and I bellied up to the meat and three…fried chicken, squash, green beans, macaroni and cheese (but that was for Mary Aplin, not me :)), and a big ol piece of corn bread. On our “Residency Budget,” I am afraid these traditional Sunday lunches have been replaced with turkey sandwiches and soup at our house most Sundays, but today I knew my extended family was down in Dothan celebrating my grandparent’s 60th wedding anniversary with a meal that could make me melt. I passed a note to Jeremiah in church saying that I might cry if I had to eat a sandwich for lunch again today :), and he was more than happy to give in.

On the way home, post feast, Pace started begging Jeremiah to take her down to the basement (where the sound equipment is) and let her play the guitar and sing with the microphone. She has been missing her Daddy so bad these past couple of months, and I think this was her way of asking to be all alone with him. The weird thing is that both she and Mary Aplin start to be mean to him when he is gone a lot. He comes home from work and (if they are still awake), they run and hide. Then when he finds them, they act pouty. However, as soon as they get more than 10 minutes of his undivided attention, you would think they had sprouted wings. His love brings an animation and spirit to them that my attention can’t touch…but when they don’t get it, they punish him for his absence. It is scary how innate manipulation seems to be inside little girls 🙂

We stayed in the study, so that Jeremiah could look up guitar chords on the computer for all of Pace’s song requests, but we had the best time playing and singing this afternoon. For me, seeing the delight Pace and Jeremiah were taking from each other was priceless. 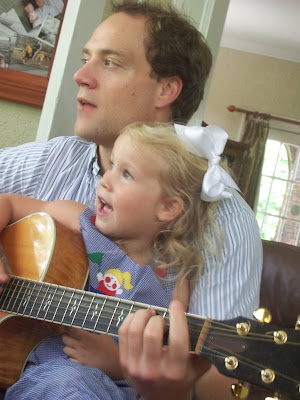 After singing, we put the girls down for naps and Jeremiah crashed in our bed while I sat beside him…stitching away. I was so excited that he was getting to nap, that I couldn’t have fallen asleep myself. Man did he need it! Finally, Pace and Jeremiah both got out of bed (notice I say “got out of bed” and not “woke up” because Pace is now refusing to nap most days) at about the same time and she asked if they could have a tea party. I wasn’t invited, so I got to cook dinner ALL BY MYSELF IN THE KITCHEN (without anybody asking to help or pulling out all of the spoons and Tupperware or fighting at my feet).

After the tea party broke up in the next room, they announced to me that they were going to run sprints on the football field. I waved goodbye to the duo who were so obviously in need of some one-on-one time and like a happy housewife whose casserole is already in the oven, I cuddled with Napoleon in the big girl bed and then took her outside to see where the wind would take us. It was just all so normal, simple, and wonderful. I am sad that I missed my grandparent’s anniversary this weekend. I spent a lot of time contemplating whether or not to pack up the girls and head down to Dothan for the day… But I know we needed today, in all its normalcy, we needed it. 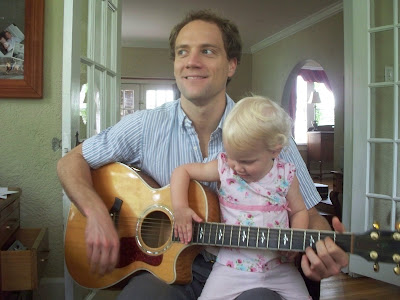 12 Responses to “Is This Normal Life?”