Published by Abby on February 21, 2008. Filed under Faith and my Mom 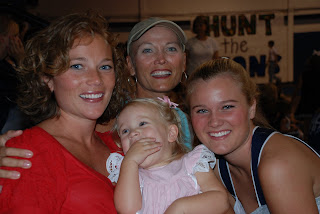 We watched a video at Mom’s “Celebration Service,” and in it there was a clip of she and I playing musical chairs with a lot of little Russian women. We were on a mission trip there, and you would think that Mom and I would have tried to enhance international relations by letting one of them win the silly game. But NO! Leave it to a couple of competitive Americans to push their butts (literally) out of the chairs we wanted to claim as our own. It came down to Mom, me and a little wooden chair, and Mom was the one wiggling her feet in the air in victory. It wasn’t this competition that threw me into a sobbing fit at that service, it was the brief moment after the competition ended. I doubt that anyone else would have even noticed, but for a brief moment after Mom popped up out of her victor’s seat, she walked up to me, laughing so hard she was bending over, and I leaned towards her and cupped her face in my hands. That was it. That one little motion summed up the complicated dynamic of our relationship.

First, it showed our intimate friendship. It’s not just anyone that you feel comfortable enough to hold their face in your hands as you both laugh hysterically. We were both completely comfortable in our skin with each other. Secondly, and much more difficult to define, it showed the blurred line we walked in the relation of mother to daughter. Normally, you would think that it would have been the Mom, holding her little girl’s face in her hands, but that wasn’t always the case with us.
I think that, of all my sisters, I am probably the most like my Dad. I believe that Mom picked up on this early and in many small ways would turn to me for direction in his absence. Things like, “Abby, I don’t really need this new white shirt that looks just like 4 other ones that I already have, do I?” Or, “Abby, you’re in charge of your sisters while I run do A, B, C, D, AND E, Ok?” I think Dad must have noticed too, because whenever we went shopping, he would always either give me the credit card, or whisper to me that I was in charge of keeping Mom from purchasing the whole store for us. Never was her need for direction more apparent than when we would travel. “Mom, why do you start to get off at every exit we pass?” “I don’t know, Abby, but you just tell me when I’m supposed to get off.” It’s hard to express in words, but the general feeling I had when I was with Mom was–You’re with me. I trust you completely. Now, let’s just go.
I’ve laughed inside many times over the past few months when people have expressed their condolences by saying, “Your Mom was just such an amazing leader.” I know what they meant, but in the strictest sense of the word Mom was simply not a leader. What Mom was, was a person who radiated joy so strongly that people wanted to be around her. Wherever she was headed, they were ready to go too, and in that sense she was a leader of people. However, the really beautiful part of Mom–the part that made her extraordinary in these last years of her life, was not her “leadership” but her ability to trust. She had a relationship with the Lord that was so real that she could look to Him, just as she did to me, and say, “You’re with me. I trust you completely. Now, let’s just go.” It was this childlike faith that made her a mighty woman of God that people wanted to follow.
So, that image that I treasure in my heart, of her laughingly resting her face in my hands, speaks all these things to me. It shows her love for me, our hazily defined relationship, but also her uninhibited joy, which ultimately came from the Lord, and made her a leader of men.