Published by Abby on November 20, 2007. Filed under Faith and my Mom 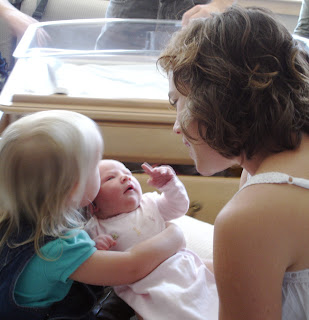 I am really sorry that I haven’t given an update on Mom in so long. You all prayed with us about Gene Hall and I have left you hanging with the results. Life has just been a whirlwind.

First the trip to Savannah: Mom and Dad went to Savannah and met with Gene Hall on Friday night. He told them that God had confirmed to him, and to some other people in his prayer team, throughout the day that He was going to heal her. He said that he had a churning in his stomach that always preceded God’s anointing. On Saturday morning, the day of the healing service, Mom was so sick that she could hardly lift her head off of the pillow. When they arrived to meet Gene, he told Dad that he’d never asked a spouse to come in the room before, but God had given him a vision that morning of Dad being in the room as well. They praised God for 4 1/2 hours! and during that time Gene’s hands became warm with God’s healing power more than he had ever experienced before. He laid his hands on Mom (and Dad) several times and they both felt the great heat coming from them. At one point, he lied face down on the floor beside Mom and started weeping. She asked him if something was wrong and he said that God had given him a vision of Mom giving her testimony about her healing and fire coming from her mouth.

I think that we (our family and friends) were all expecting an immediate and total healing, and apparently that was not God’s plan. Mom left the healing still feeling very weak and displaying all the physical symptoms of her cancer. However, Gene seemed happy with the day’s result. He has said since that God has confirmed to him that the healing power is in her. I am telling you what happened, but I am afraid I can’t tell you that I understand what God is doing. I only know that He is a mighty God and His ways are perfect. Gene told Mom and Dad that the last person he laid hands on, did not receive complete healing until two weeks later.

Now: I am in Dothan with both of our little girls. Mom has been really sick. Really sick. However, God has still shown us his great love through his people, and we are still waiting for His healing. As mom said so beautifully Sunday night as she pointed towards heaven and addressed God himself, “I know what you told me, you gave me Luke 5 and Matthew 8 (the passages about Jesus healing the leper), and you are not a man that you could lie.”

So, I am planning on being here until God heals her. I do want to make clear here that God is not on trial… We are all just trying to follow Him as best we know how, but we are human–imperfect, and no matter what, God is Sovereign. I know that there are no two people I would rather be following into this battle than Mom and Dad, and now I would ask you to continue to pray for God’s healing power to be released within her. Jesus told his disciples (when they had been unable to heal someone) that their faith had not been great enough. With faith as small as a mustard seed, they could move mountains. So all I know to do is to have faith/believe what God has told Mom, Dad, my Grandma (and many others) and wait for our powerful God to move the mountain