Must He Keep Teaching Me the Same Lesson?

Published by Abby on March 2, 2007. Filed under Love and Marriage 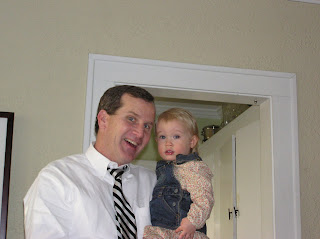 I woke up this morning, and it was business as usual. I made Jeremiah’s breakfast, he left, and I sat down at our breakfast table to do my devotion. Pace was in her highchair beside me, eating a piece of cinnamon toast, and I found my eyes wandering out the window. There, a gigantic tree stands in a neighbors yard, its trunk and branches laden with deep green ivy. The sky radiated a bright blue, with lazy brush strokes of white, and the sun crept up the base of the tree, casting a golden glow through the branches and ivy. Such a beautiful morning, and standing in such stark contrast to the devastation of yesterday. What happened? How can we comprehend a God who demonstrates His mighty power through deadly winds, pelting rain, and frightful lightning one day but then demonstrates his serene beauty the very next morning. The answer is that we can’t comprehend Him.

I tore my eyes away from that glowing tree out my window and prayed that God would give me wisdom about the deaths of those eight children in Enterprise yesterday. I wanted a word on why there are mothers still lying awake in bed this morning, praying that they could transport themselves back to yesterday morning, praying they had clung to their children and never allowed them to leave for school. Praying that they could wipe the image of their child being crushed to death by a brick wall, as they huddled in fear of a storm that would answer to His slightest whisper. Why?

I read today’s lesson in Streams in the Dessert. It was a great lesson on giving the Lord your first moments of the day, but still He gave me no wisdom about yesterday. Then, I read my chapter in 1 Corinthians. It was Paul’s famous lesson on running our Christian race, with the same sort of discipline and devotion as an athlete training for the Olympics. Thanks God, that’s a nice reminder, but I am asking for wisdom. Don’t you always promise to provide wisdom if we ask for it? I was about to start doing the pray, open to a random passage and read technique, when Pace got fussy enough that she could no longer be ignored. It was time for her bottle, “Milk, milk!” she cried.

So, I scooped her up, slightly frustrated, and went back to our bedroom for our little prayer ritual. As I climbed back into bed with her and handed her her bottle, I knew the Lord had been waiting for me there. We need to talk, he was whispering. I have different ways to speak, besides my written word, remember. As I went through my normal prayers, I started praying for the families of those children in Enterprise. I let myself realize that they were more than just a number, 8 children killed. Those 8 children have names, families, and lives that they left behind. Then, God finally gave me the wisdom I had been seeking all morning. Instead of a new revelation, it was an old truth. The same old truth He has been teaching me through all this mess with Mom. The truth of His Sovereignty. Yes, He is in control. Yes, He did allow that storm to take the lives of eight children, but He still hurts with those families just like He hurts with ours. He still doesn’t owe us an explanation but requires us to have faith in His ultimate goodness. Maybe there will be a spiritual awakening in Enterprise because of these deaths, and countless numbers will come to know Him through their questioning. Maybe, only one person, affected by losing their friend, will come to know Jesus. We can speculate, but all we really know is that His greater good and purpose will be served through this tragedy. In the meantime, all we can do is keep going to Him for the answers and rest in His sovereignty.

4 Responses to “Must He Keep Teaching Me the Same Lesson?”