Published by Abby on June 23, 2008. Filed under Life and Laughter 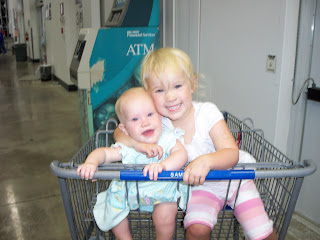 A couple of weeks ago, I took both of the girls to the pool. We ended up staying a little longer than I expected, especially since I still planned on taking them to the grocery store and Sams. I knew we were going to run way into nap time, but some days you just have to do what you have to do. We pulled into Walmart, I put Mary Aplin’s pumpkin seat right in front of me (where babies are supposed to sit), Pace in the cart (to play in all my groceries:)), and my purse I put in the cart–by Pace and tucked underneath the pumpkin seat. I was doing the normal Mommy grocery store dance…letting Pace eat cookies, dangling toys in front of Mary Aplin’s face, checking off my mile-long list, all while attempting to pick the lowest prices on the shelves.

At one point, Pace cried out, “Mommy! somebody just took something!” I glanced down to be sure my purse was still there, and since it was, I reassured Pace that they were just picking out their groceries like I was. I finished up my shopping, unloaded my heavy laden cart, and as I picked up my purse to pay, suddenly felt my heart start racing at the realization that my wallet wasn’t there. Pace’s comment came racing back, and I just knew what had happened. My wallet had been stolen, and as I went to customer service to call the police, another lady came up who had just realized her wallet had been stolen as well.
I was angry. I felt violated. I felt sick as I realized that my birthday cash from Dad was still in my wallet, as well as several gift certificates and checks I’d been saving since before Christmas–just waiting for the perfect time to use them. I had two very tired and fussy girls, one of whom hadn’t nursed in 5 hours. I needed those groceries and had no money to buy them. And I waited for over an hour for a policeman to show up to write down some facts that I knew very well he was never going to do anything about. Pace told us that the man who took my wallet was a black man, with a black shirt and a hat. The eery feeling of a big arm reaching down between my two innocent children to steal from me–the thought of him making eye contact with Pace, below the rim of his hat–the heartlessness and brashness of a person willing to steal from a mom in the middle of the day–all of it just kept sending chills down my spine.
If you would, pray for me. Pray that my wallet gets found and that I get all this crap worked out with my checking and savings accounts. And I’ll leave you with what Pace tells people whenever they ask her about the Walmart incident, “A mean man stole Mommy’s wallet, but she didn’t give him a spanking!”
(The picture above is M’Apple’s first time getting to sit in the cart like a big girl. We are at Sams, and Pace was beyond excited about getting to sit with her sister.)

13 Responses to “My Walmart Incident”