Published by Abby on January 10, 2007. Filed under Love and Marriage-Family 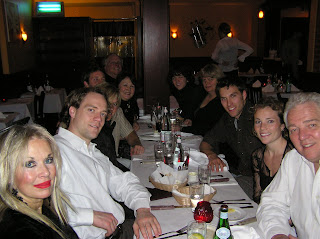 Saturday afternoon, after we (the girls) had enjoyed a little shopping, we met up with Uncle Sam, Aunt Jeanie, and Samuel. Aunt Jeanie had taken some moving and beautiful pictures of shop displays and people. She even asked Mrs. Maddox, Alex, and I to be window shopping in a couple of them.

The subject of Gramercy Park Hotel was brought up, and the decision was unanimous to take a trip across the city to experience Alex’s old stomping ground. When we walked into the hotel, my overall impression was that a cedar forest must have wooed a primeval castle, and their union had produced a very artsy and abstract child. The smell that overtook you in the entrance was a cedar closet that had been given a good scrub down with your mother’s most expensive soap. The walls were rough wood, and it seemed that if you leaned against them you would find yourself with a splinter. The enormous blown glass chandelier dangled delicately but ominously from the high, exposed-beam ceiling. Oversized fireplaces blazed in the distance. Heavy red draperies were hung 20 feet in the air and tumbled to the floor in piles of liquid velvet, making a dominant statement of permanence. The ambiance was dark, with low lights dimmed to an even darker hue by jewel colored sconces. However, in the midst of this union of old and new, there hung gigantic original works of art by Andy Warhol and Julian Schnabel with their abstract sense of space, skewed lines, and brave color pallets. The furniture was bordering on New Age, with shark-toothed light fixtures, shallow couches, and royal blue velvet fabrics. This was a place of art, and a place where it was OK to be different. It was, however, not a place to huddle in large groups, laugh raucously, and take tourist shots. Even so, that was exactly what we did 🙂 The stiff manager on duty, the aquiline-faced doorman, and the model bar tender all did their best to show their respect to Alex, their former co-worker, and her rowdy family. However, when we turned away, I could feel the tips of their mouths curling into a smile as they looked at us down their pretty noses.

Evening came and it was time for the theatre! Or at least, that is how Jeremiah and I dressed. I wore a red dress with a plunging back, and Jeremiah wore a suit and tie. It felt like everyone else at the theatre wore blue jeans, or some close equivalent, but Jeremiah and I stood proud in paying our respect for this esteemed art form. “The Color Purple” was a delightful experience with magnificent singing, lively dance numbers, and a moving story line. There was some lesbianism that seemed forced and added for political correctness. It was short-lived, however, and we didn’t allow it to detract from our overall experience. Tommy, who had a front-row seat said that some of the suggestive dancing, which was just amusing from our seats, was outright vulgar from his close proximity (but I don’t think he minded THAT much :)). After the play, we went to a fancy pizza and pasta restarurant right there on Broadway and all shared our favorite moments from the play. Down at our end of the table we also heard the soap-operaesque stories of some of Aunt Jeanie’s friends, and laughed as Uncle Sam realized he had bought a $40 gourmet pizza that he could hardly stand to take a bite of because of its funky cheese 🙂

The night ended with a quick stop at a bakery where we all munched on various desserts and found ourselves so giddy with tiredness that we laughed about nothing until we cried. Jeremiah and I also invited Tommy to come stay in our room for the night. The guilt of knowing that Tommy, Mrs. Ohs, and Alex were all sharing one futon while Jeremiah and I had an extra bed in our hotel room finally got to us. Tommy, Jeremiah, and me piled into our room still laughing and reminissing about a fun night.