Published by Abby on January 12, 2007. Filed under Love and Marriage-Family 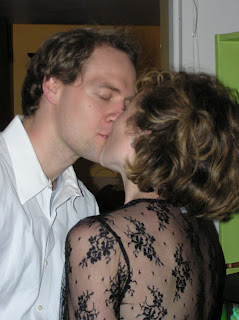 Sunday morning, New Year’s Eve Day, shone brightly into our room on the 18th floor of the Warwick hotel. I rolled over to snuggle against Jeremiah, and oohh! there was Tommy sleeping peacefully in the next bed. I sat up a little abruptly and woke both the boys. After looking at the clock, we discovered that it was almost 9:00. We never (especially Tommy) sleep that late. We found ourselves warring with the conflicting feelings of thankfulness for a full nights rest and irritation at wasting the start of a new day in NYC. We called Dr. and Mrs. Maddox to see if we had missed out on the day’s plans and discovered that Mrs. Maddox’s cold had taken a turn for the worse during the night. She barely got any sleep, needed medicine, and needed to try and rest during the day so she would have a chance of celebrating with us that night. With all of these anxious thoughts, my inclination was to jump out of bed and get a plan for the day. Tommy, however, offered up the idea of a devotion. I admit that my heart was a little reluctant…there was just so much out there to do and see…God would understand, but Tommy opened the word and started to share with us some jewels he’d discovered in Haggai. We discussed all of our thoughts on the passage, and then each shared struggles in our own lives that we needed prayer for. Finally we prayed; oohhh how we prayed. We lifted each other up, we thanked God for how richly he has blessed us, we mourned for each other’s struggles. It was powerful. I was so thankful that Tommy had nudged us to exactly where God wanted us that morning.

Then, after throwing on some work-out clothes and getting Mrs. Maddox some breakfast and medicine we (Jeremiah, me, Tommy, Alex, and Dr. Maddox) headed for Josh’s apartment. There was exercise to be had :)! The morning was glorious, with a bright blue sky and crisp, clear air. Josh led our group on a jog down to Riverside Park. We ran along with the Hudson River to our left and the city skyline to our right. An eager pilot was inscribing “USA” with his puffy white pen on cobalt paper. We felt like it was a message sent directly to us as a reminder to celebrate our country on New Year’s Eve day. We left Riverside and jogged on past skyscrapers, pretzel vendors, and mattress stores. We sprinted up an occasional hill and stopped for breaks when a member of our group was winded. Finally, we reached Central Park. The boys wanted to stay and play a game of handball, but Alex and I weren’t done with our running adventure. I had never been to Central Park and she led me past a beautiful pond where ducks huddled in groups with beaks tucked under their wings while they rested. Then, we crossed a white painted bridge that looked like it was made of porcelain. We ran past an expansive green field, and Alex described the open air concerts with people lying on blankets eating picnic dinners out of coolers and sipping on wine, so vividly that I could almost hear the music myself. We found another pond where she and Josh sometimes sit on a lonesome rock and play music on their guitars, and then we picked our way through some brush to find a short-cut back to the tame sidewalk. Finally, hunger and fatigue began to threaten the tranquility of our run, and we decided to turn towards home.

The next thing I did is probably going to seem strange to mention as a significant part of a trip to New York City, but I took myself back to the hotel and had a bath. It was not just any bath, because I was cold down in my bones and so tired that my body felt like a limp dish-rag. I turned the water on as hot as I could stand, and then I dipped down into the fiery depths and closed my eyes. I was too tired and cold to even think about bathing for at least fifteen minutes, and when I did start to take my bath I did it very slowly. Wash face…break, wash arm…break, scrub hair…let it soak…rinse it out…break, and so forth until I had been in the tub for around 45 minutes! It was so relaxing and especially fun for me since I can’t remember when I’ve had a bath and not been trying to hurry and finish as fast as I could before Pace finished eating, or woke up from her nap.

After “The Bath”, Jeremiah and I met Tommy, Josh, Marissa, Alex, and Mrs. Ohs for some Mexican food and margaritas. So maybe it was Sunday lunch and we were drinking, but we celebrated a little freedom as Josh would say. The food was great, the drinks were greater, and New Years Eve was about to be upon us. We spent the rest of the afternoon sight-seeing and trying to find somewhere that we could have afternoon tea. Everywhere was either closed or had some ridiculous minimum price you had to spend to sit at their table on a holiday. So, we ended up at the Starbucks in Josh’s neighborhood 🙂 Around 6, Jeremiah and I headed back to the hotel to change clothes for the evening. We almost couldn’t get back to the Warwick because streets were being closed off and masses of people were already gathering in Times Square. We begged our way through barricades and were thankful that we were not going to spend the evening in that cold circus.

We had reservations at an Italian steak restaurant called Talia’s. My fillet was perfect, but Jeremiah and Dr. Maddox had a fiasco with their steaks. The asked for their steaks to be cooked medium, and they were most definitely well done. They sent them back, much to the displayed chagrin of the manager, only to receive them again 20 minutes later VERY rare. Jeremiah sucked it up and ate his, but Dr. Maddox decided to give it one more try on the fire. Unfortunately, it was just as rare when they brought it back the 2nd time. We had fun, but decided not to give them our business for dessert. So, the boys and Alex went to pick up some champagne, ice cream, and cookies and the rest of our party (which included Uncle Sam, Aunt Jeanie, and Samuel) headed to Marissa’s apartment.

We all crammed in by the fire, watched “The Grapes of Wrath” (which was the odd but surprisingly enjoyable choice of Josh and Tommy) while still occasionally checking on the Times Square countdown, and were happy to just be together. Then, we all (or almost all) celebrated the New Year with a kiss and commented on how fun it was to watch the ball drop and know that all that revelry was only a few blocks away. The “grown-ups” left and we prayed in the New Year, which culminated in a spontaneous outpouring of praise songs. Happy New Year!