Proud to be an American

Published by Abby on November 4, 2008. Filed under Life and Laughter 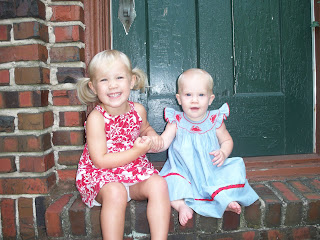 (A picture from July 4th, but the only red, white, and blue I could find) I just did my civic duty. I dropped Pace off at MMO and took Mapple Dapple with me to the polls. I was assigned a fire station in Woodlawn, and as I walked into the open enclosure filled with tables and voting American citizens, I was amazed by the sense of Patriotism I felt. We were so diverse, and yet all there–Americans. I saw an old man with his hair perfectly combed, his collared shirt tucked into his belted khaki slacks, and his back held rigidly straight. I just know he fought a war so that I could be there casting my little vote, and I felt the urge to run hug his neck (don’t worry, I didn’t). Then there was the petite Mom, wearing a crisp black and white print dress with little black flats, her baby nestled closely to her body in a sling. The middle-aged black man, with worn blue coveralls. The tall, slender physician, in her scrubs and Dansko shoes, with her hair pulled back in a blonde pony-tail. The flamboyantly gay man with his spikey hair, small stylish glasses, and man-purse. The conservative business-man in his charcoal suit, red tie and briefcase. There were several middle-aged black women working the polls, offering guidance with a smile and cooing at my baby. Then there was me, sweaty and wearing my running clothes with a baby propped on my hip. It was America at work and it was beautiful to me this morning! I am proud to live in a country where we can all gather together and vote, each with our own passionate beliefs and love for our country–angst for the state of where we are, and still respect each other as humans and more than that, as Americans. And while I filled in the little bubble for a total “Republican” ballot, making sure that I marked McCain/Palin as well (just to be safe), no matter who our next President is I will be happy, because we’re America and this is how it works. Besides, I know who’s ultimately in charge of our leaders, and I trust Him completely.

2 Responses to “Proud to be an American”