Published by Abby on May 9, 2009. Filed under Love and Marriage 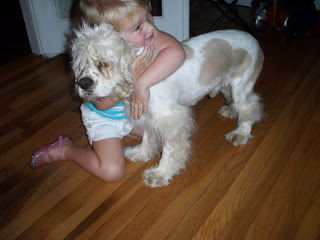 My girls have not seen their father since Cinco de Mayo dinner. We left El Cazador, and Jeremiah asked if I could do the girls’ bedtime routine so that he could cram for all of his cases the next day. Since then, we’ve been rising around 4:30. He gulps down cereal while I make his lunch–because they certainly don’t give him enough time between cases to go somewhere and EAT–then I shove his coffee in his hand as he rushes out the door. He hasn’t gotten home until around 9, and then I warm his dinner. I sit there while he eats, and one of us looks at the other and says, “SO, how’s YOUR life goin’?” and we both laugh really hard. We go to bed EXHAUSTED, and it starts again. This is Trauma at UAB, and it is horrible.

Part of the problem is that he has had a couple of really good rotations in a row. We’ve grown accustomed to seeing each other–even hanging out together. The girls are missing him bad. Pace jumps out of bed in the mornings like a dazed animal and says frantically, “Did I get up early enough to see Daddy??!!” Then, she goes to bed at night saying, “Is Daddy going to come home soon and eat his dinner?” It is sad.
It makes me feel petty to be overwhelmed by ALL ALL ALL the one-on-one time I’ve had with the little ruffians, when I know Jeremiah is being worked to the bone. But the fact is, I AM overwhelmed and this is only his FIRST week of a TWO MONTH rotation. I’m thinking about moving to the beach…Anybody else want to come?? 🙂
When we were first married, I got mad at Jeremiah about these long hours. Surely he must be an over-eager beaver?! Surely EVERYBODY isn’t working like this? Then, I realized they were, so I started getting mad at “the hospital.” I have drafted many a letter to “the hospital” telling them just what I think about them,…but I think Jeremiah would have killed me if I had ever sent one of them. So now, I’ve decided to transfer my anger to…Obama.
Now that I can see end of the strenuous treadmill they call residency, I’ve started to be eager for a little compensation for these hours we’ve both been pullin‘. I’ve started to feel like we’ve ALL (the girls included) sacrificed a lot for this all-encompassing career, and by goodness, I don’t feel bad about wanting to be paid real live money for it! But now, NOW we have Obama, who thinks Jeremiah should work for free. Could somebody ask Obama how he expects us to pay off all of Jeremiah’s student loans and the debt we’ve been accumulating just to LIVE over the past four (going on six) years? Could somebody ask Obama if he has ever had to take trauma call and witness the kind of discipline, skill, endurance, and knowledge it takes to do that? Can somebody ask Obama what kind of people are going to WANT to live through this kind of hardship, if you refuse to pay them well for it?–not SMART people. Do you want your doctors to be smart?
So, it’s 9:30 on Friday night. I’m mad because I know my husband is standing over a body in some cold OR starving to death, and the best person I can think of to be mad at is Barack Obama. There! Thank you for listening to all of that.

22 Responses to “Put OBAMA on Trauma”