Published by Abby on June 21, 2008. Filed under Nature and Embroidery 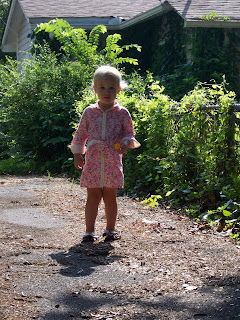 When I was a little girl, there was a fence that ran the length of our backyard, and when the oppressive heat of an Alabama summer began to wilt my enthusiasm for the great outdoors, the masses of tangled honeysuckle that covered that fence beckoned me into the heat. I used to stand with my face buried in its downy softness, breathing in the intoxicating sweetness. I would pluck one blossom after another, until I became a master at determining which shade of buttery yellow bloom was destined to hold the most nectar. I would slowly pinch off the tiny green bud at the flower’s base, gingerly coaxing the gossamer filament out as I tried to make the droplet as large as I could before it dripped into my eager mouth. There were many days that I took one of my little cups along with me, proudly declaring to Mom that today I was going to fill an entire cup with the sweet nectar. I am sure you can imagine that that goal was never even almost attained, but those hours I spent trying are some of my earliest memories. I think that it wasn’t only the beauty and smell of the honeysuckle that lured me, but also the sense of abundant excess. As a child, everything in your world is so limited. Only one cookie, or 10 more minutes of playtime, or because I said so’s…but here, here I had the freedom to make myself sick if I wanted to. I could look down that fence line and know that no matter how many blossoms I picked there were still more than I could even dream waiting for my fingers to pluck them next.

This morning I took my restless girls outside for those potentially frustrating minutes between breakfast and Mary Aplin’s morning nap. First we went for a little swing in the Brooks’ front yard. With literally days left before a big truck comes to take away the beloved neighborhood swing (the tree is apparently dying and a danger to their home), I find myself wanting to soak up every minute. I feel like such a, well, tree hugger, but the thought of that tree being cut down makes me want to cry. Anyway, I was much more into the swing this morning than the girls were, and Pace asked if we could take a walk. 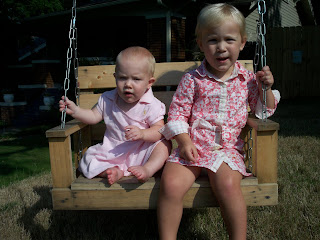 As we set out, I had a flashback of all the mornings 2 1/2 years ago, that I started from the street in front of the Brooks’ home to take a walk with Lauren, Caroline and Natalie, Ashley and Noah, and Pace and me. Since Caroline was 3, Lauren used to point out flowers and bugs and all sorts of things to help keep Caroline stimulated while the Moms all vented the events of our latest sleepless night. I used to listen to Lauren and wish so badly that Pace and I could have conversations like she and Caroline could…that I could teach her things and watch her little mind take it all in. So as Pace, Mary Aplin, and I set out, I realized that I was there! I could teach Pace and talk to her…How fast they change while we blink our eyes.

Now with the realization that I could teach her, another realization set in rather quickly as well. I didn’t know the names of the flowers or bugs we were passing. How could I teach, if I didn’t know anything myself? I suggested to Pace that we take a turn and head down the alley. Surely, I thought, there would be something there I could teach her, even if it was only ivy. Then suddenly, like a little beam of hope in a wasteland I spotted a cluster of rosemary. Thank you Jesus I do at least know what rosemary looks like! So, I picked a sprig and held it up to Pace’s nose for her to experience that sprucy, tangy scent for herself. I let her pick some to keep in her pocket and told her that the next time we made chicken, I would let her pick some for me to cook with.

We kept walking and soon we saw the honeysuckle. There wasn’t the abundant profusion of my childhood, but we were able to pick a few blossoms. When we got home, we sat down in the damp grass, and as I showed Pace how to gently pull on the green bottom, to capture a little piece of heaven on her tongue, I was sucked back to those old feelings of my childhood, in a backyard surrounded by honeysuckle. It felt invigorating to be able to teach her..even something as small as how to recognize rosemary and enjoy honeysuckle.

2 Responses to “Rosemary and Honeysuckle”