Published by Abby on October 16, 2008. Filed under Life and Laughter 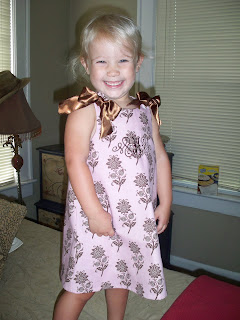 Yep, that title stands for exactly what you think it does…the S-word. In a spirit of keeping it real over here on the Maddox family blog, I’m going to share with you that it’s not always “Onesie Wednesday” and “Coffee Into Water.” Unfortunately, everything that comes out of my mouth is not pleasing to God and useful for the instruction, encouragement, and admonition of my babies 🙂 Yesterday, I realized that I had forgotten something at the grocery store. It hit me mid-conversation with Jeremiah about something totally different, and I stamped my foot and said, “Dad-gummmit!” Pace, who was sitting on the couch in front of me, jumped up, stamped her foot and said, “S@!#”
Jeremiah and I both wheeled around to look at her and gasped in horror. She could tell by the looks on our faces that the new word she’d decided to try out, did not sit so well with Mommy and Daddy. She buried her face in her hands and refused to look at us or speak. We kept trying to reassure her that she wasn’t in trouble, we just wanted to know where she’d heard that word. In the meantime, Jeremiah is looking over her head at me and laughing and shaking his head. I wanted to tell him he was wrong, that she never would have heard that from me, but sadly, I had a different story playing through my mind.
Last week I was driving to Smith’s Variety–on a happy errand to pick out birthday paraphernalia for our little birthday girl. Now, I have a tendency to always run late, which I believe has led to the tendency to perpetually drive too fast and follow too closely–even when I’m not running late anywhere. I was on a REALLY curved road (For those of you from Birmingham, I was on the road between English and Mt Brook Village, you know just before you get to the Zoo entrance), and I noticed that the car in front of me began applying their brake. I assumed it was the natural brake touch that anybody would give on a curvy road, but as my big SUV continued barrelling toward their little car, my mind also began to register that their left brake light wasn’t lit up and THEREFORE maybe they were making a left turn and not just a little brake tap. The road is so curvy that I couldn’t afford to hurl myself into the other lane and risk a head-on collision, so I just slammed down as hard as I could on my brakes and out it came, “S$#!”
As soon as it started, I realized what I was saying, but it was too late. We managed to stop within a breath of that car (Dad I know you are getting ready to call me with a lecture on driving too fast, following too close, and the precious cargo I am carrying–You’re right!), and all Pace said was, “Mommy, why were you trying to run into that car? It scared me!” Whew! I thought. She didn’t notice. She was too startled by the near accident to register that ugly word I let out. But I was wrong. Here we stood, a full week later, and that word was coming right back out. Just like she absorbs those Bible stories, apparently she absorbs cuss words too.
Once we calmed her down, we explained that it was a REALLY ugly word…even worse than stupid. She cried and said she was sorry. I felt horrible because I’d taught her the dern thing and here she was feeling all guilt-ridden about it. She hasn’t said it again. Let’s just hope her Mommy can keep her tongue under wraps so that she doesn’t get a second lesson on the art of colorful language.
(I wasn’t sure if I ever posted any pictures of those first dresses I made. These are them. Try not to notice that Pace’s bows are the wrong color and WIRE-rimmed! I thought you might enjoy a shot of her penitent face :)) 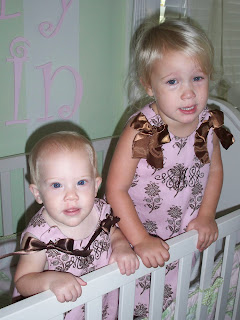