Some Mornings You Wake Up to This:

Published by Abby on May 20, 2009. Filed under Life and Laughter 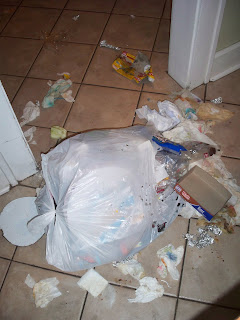 It’s been a long couple of days. Isn’t it always when you come back from vacation? Well, what about when you come back from vacation (after leaving your over-tired husband and your dog the run of things), your husband has had his best friend in town for the weekend (who is very neat and a great helper but still a BOY), AND you have two house guests rolling into town at almost the same moment as you. Fortunately, the house guests were just my sister Kendall and her boyfriend Watson, or there might really have been some cause for alarm. 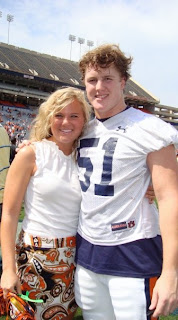 Aren’t they cute :)? I feel like I just name dropped in picture form. Yes, how did you know Watson played football for Auburn and we’re really proud of him? Could you tell from that picture I accidentally dropped there 🙂 They’ve been dating (ummm, sort of, bumps in the road you know) since 8th grade and we love him. I especially love him, considering he is the big quiet guy pictured above, but then I sneak into the computer room, after not seeing him or Pace for around 45 minutes, and this is what I find: 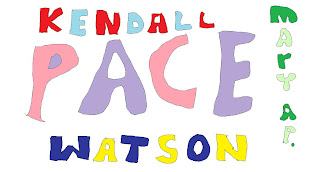 He had Pace enthralled with the “paint” program. Mary Aplin was also content for around half an hour to sit on top of his chest while he laid on the couch with cartoons on. She won’t let me hold her like that EVER. He is so good with kids, it’s sort of amazing. And there were several times he saw me getting flustered and just sort of scooped them away. He is going to make a good daddy one day.
I have REALLY digressed…back to my house. Who wants to clean, or unpack your gigantic suitcase, while you have a sister to hang out with? Who could resist the opportunity, if you have all three of your sisters and their significant others in one town, to have a little dinner party? Who, if their sister and her boyfriend offered to take your children to the zoo for the whole day, would want to spend that precious time cleaning when you could be…decorating?!
I hate my bedding. Just before we got married, my mom and I ransacked TJ Maxx and Tuesday Morning to find our bedding. I can remember being adamant that it could not in any way be girley since this was going to be a boys room too (I remember Mom rolling her eyes at how much I emphasized this new life development and the state of decorating crisis it was putting me in). I think by nothing girley, I must have meant nothing pretty because this is what we’ve been sleeping in (an old pic but you get the idea): 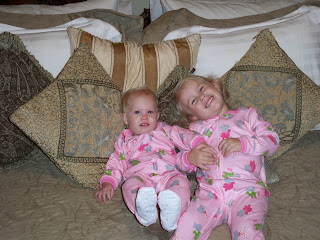 If you count them, there are TWELVE non-functional (as Jeremiah calls them) pillows on that bed. There is an elaborate routine every night for taking them off, and Jeremiah despises those pillows in a way that my dissatisfaction in the way they look could not even touch 🙂 This is where Mrs. Linda (MIL) comes to the rescue. FOR MY BIRTHDAY SHE IS LETTING ME REDO MY BEDDING!!!!!!!!!!!!! She told me a month or so ago, and I have been sketching and dreaming ever since. Jeremiah has added one, rather large, stipulation…only ONE non-functional pillow allowed. That means only ONE, of all the beautiful fabrics I’ve been drooling over, could make the cut. It had to be perfect. Here it is. Are you ready? 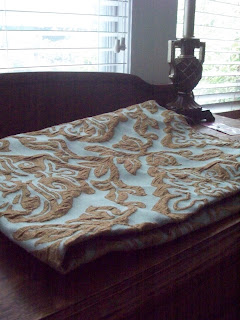 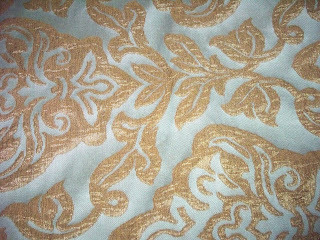 I don’t feel like these pictures do it justice, but I love it. I love it so much that when I saw my neighbor Lauren in her front yard yesterday afternoon, I didn’t care that she was digging a hole to plant a shrub, I ran right over to show her. The bedding is ruched and cream and then my grandma: 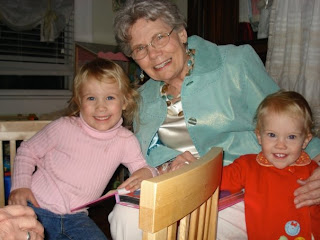 is going to cover the 48″ bolster pillow I have ordered (if there’s only one, it’s got to be big right? :)) with the fabric.
I have majorly digressed AGAIN. So, I had lots of fun the past few days, but my house stayed filthy until late yesterday afternoon when I finally unpacked my two huge suitcases that were stuffed beside my bed and CLEANED. I expected to wake up this morning and finally start the day right, but that picture above, the one with the trash strewn all over the floor, is what I awoke to find. Apparently the smell of roast remnants in the trash bag, were just too much for Locks last night. He even took some of his favorite trash pieces to the French doors…I suppose he wanted to enjoy his midnight snack with a view of the yard.

I was so mad, I could not even punish him. I am so tired of disciplining people (have I mentioned we now call Mary Aplin Napoleon), that I have lost the will to fight. Last night, I was thinking that I should just record my voice saying “No” over and over again, tie the recorder around my neck, and let it play constantly while I go about my housely duties. That is what I feel like I do anyway. I took one look at the smushed peas, coffee grounds, and unidentifiably dirty paper towels, and I had the same thought I have often encountered as “the mother”–“Isn’t there somebody else who is supposed to clean up this nasty mess?” Only to find, again, that the answer was, “Nope, just you, so get to it.” Happy morning to ya 🙂

11 Responses to “Some Mornings You Wake Up to This:”