Published by Abby on August 3, 2009. Filed under Intake and Outtake 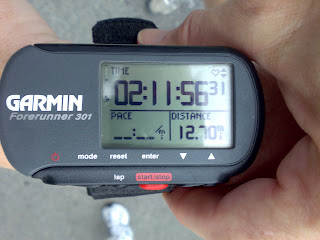 I have not been too busy to blog, but I have been too busy to haul two small children to a camera/battery store across town, try to listen to a salesman while the girls pull various and sundry expensive items off the shelves, pay the money for something that may or may not work, and try to fix my camera so that I can blog. SO, I have missed y’all. That picture is our mileage and time from our long run on Saturday morning. Almost a half marathon. This week I felt tons better than last week. I think this was mostly because I wasn’t afraid to slow the entire group down and be at the tail end of the line while we ran. I gave them one run to get to know me before I became the leech that’s not afraid to slow down everybody else. I’ve decided they can leave me, they can kick me out, or they can do like they did this week and run back to me over and over again in the run so that we finish at the same time 🙂 I am exaggerating a little…but not much. 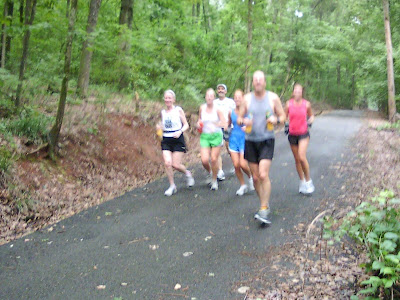 Several of you asked about how I got the pictures, and so this week I asked Tom Riser if he would hand the camera to another group member so that we could snap him in a shot for the blog. Here’s what we got. He’s the one in the front, double fisting it with the power drinks, but you see he’s blurry as all get out. Maybe next week. Apparently Dr. Riser (and his wife Margaret, far left, also Dr. Riser) loves gadgets, and this is some new runners camera or something…that he is trying out on us. He is almost always at the front of the group, but he’ll sprint a little farther ahead, and then turn around and snap us.

Everyone in the group is medical but me. On the first run, they each sort of ran beside me (huffing away) for a while to talk. Me: So What do you do? Them: I am a [insert specialty here] doctor. What about you? Me: I am a stay-at-home Mom (that sounds sort of lazy)…and I like to write (so do a lot of people)…and I have a blog (they probably have no idea what that is)…and I have a small business where I embroider for people sometimes (that’s sort of a lie. would you really qualify the Flossy Finch as a business)…but I went to school to be a chemical engineer! (ok, now you sound like one of those people who put their high school presidency of the French Club on their grown-up resume). I am going to stop now. Mainly, I am just a Mom (and they would have been perfectly happy with that answer you insecure fool).

In the meantime, I have done some other things besides run. I have spent an entire day getting a sewing lesson from Riley’s (Caroline, my sister’s, boyfriend) Mom while Caroline watched my girls. I learned a lot, but to spend an entire day and have only the TOP of a dress made was a bit discouraging…Discouraging enough that the lesson was Tuesday (a week ago) and I still have not even had the heart to take my sewing machine out of the back of my car.

Let me try to end on something positive… … … … Mary Aplin has started talking more. We’ve moved past single grunts, to grunts that sort of sound like words 🙂 I’ll try to be back sooner, but I am still dreading that trip to the camera shop!

17 Responses to “Still Alive and Running”