Published by Abby on November 29, 2007. Filed under Faith and my Mom 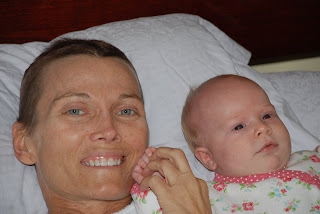 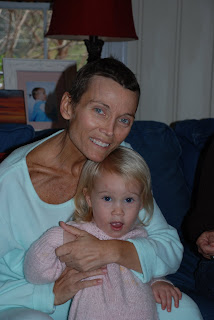 This is the first time I have been back on the computer since the last posting. Things are pretty hectic around this house most of the time. I just wanted to thank you all for the overwhelming love and support through your emails and posts on this blog. It’s amazing how God can hug and encourage you through His people. I have run into people I’ve never even met before, here in Dothan, who have told me they were waiting for an update on this blog 🙂 It’s humbling and exciting how quickly word spreads and how sincere people have been to love and encourage our family. Thank you, thank you, thank you!! You can’t imagine how much it means.

Mom has good days and not so good days. She had a blood transfusion Tuesday, was still really weak and rested most of the day on Wednesday, and woke up this morning and asked if we all wanted to go to the Waffle House :)! She was even able to sit up in the front seat for the ride there. We are just trying to love on her during the bad days and thank God for every good day, while we wait to see the manifestation of the healing we feel like He has promised. There have been prayer warriors in this town, in other towns, in other countries even who have contacted us to share words of healing the Lord has given them as well. In our darkest moments, it seems like God is continually producing someone else to lift us up with their own word for us from Him.

On the Wednesday night before Thanksgiving, another healer (a man who had actually been raised from the dead and has written a book about it) came to lay hands on Mom. Again, just like with Gene Hall, he wasn’t someone that we sought out. A family friend called Dad and said this man was coming in town to spend Thanksgiving with their family, and they would like to bring him over to pray for Mom. I got to be in the room this time around, and it was a moving experience. He explained (with Scripture) a lot of the same things that Gene Hall had told Mom to be doing, that we had just taken on faith. For example, he told us that we need to thank God for His healing now…even though we don’t see it yet. He reasoned that we have not seen physical evidence of our salvation, but we still say that we ARE saved. Even though we haven’t gone to heaven yet, we still believe we have salvation NOW. In the same way, God has promised healing, so we need to thank Him for it NOW. That’s part of faith. He, like Gene, expressed the power behind our words, and the importance of Mom being surrounded by people who encourage her with their words. Humans are the only other beings that God fashioned in His own image, and how did God create the world?…by speaking it into existence. Satan, and his demons, cannot read our thoughts, but they can hear our words. If we speak our fears aloud, then it gives him a foothold of something to use against us.
I didn’t really plan on writing out all of that, but I have been learning so much since I’ve been here. I believe that there is more intimate fellowship with God, that we can have on this earth, that I have been missing out on. I don’t feel like I’ve been wrong, but I do feel like I want to experience all of Him that I can. I heard this healer start to speak in tongues. It was BEAUTIFUL and so obviously of God. No man could make their voice do what his was doing. I was awestruck. He anointed her with oil and water from the Jordan River, while we all prayed. The Lord was almost palpable in that room. The healer said that he had seen people raised from the dead without feeling the anointing as much as he did when he was laying hands on Mom. Please keep praying with us, having faith with us. Thank you for your love and prayers!