Published by Abby on March 12, 2007. Filed under Love and Marriage-Family 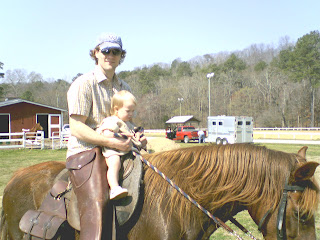 I have learned that the number of days that I blog during any given week is directly proportional to the number of days that Jeremiah is on call. He was not on call AT ALL last week, and therefore, I never managed to find the time to sit down and write. Even though he is still working on those days that he isn’t on call, it always seems like there is so much more that I need to be doing so I can have it done before he gets home. I have a much more laid back, “take some time to do what I want to do” attitude on days when I know he isn’t coming home. Anyway, enough excuses.

We had an INCREDIBLE time this past weekend. It was Jeremiah’s and Mrs. Maddox’s birthday, and Dr. and Mrs. Maddox, Tommy, Alex, and seven horses came up to Birmingham for a visit. I have learned to not get my heart set on any kind of agenda when there are Maddox family festivities at hand. Just as soon as you think you have a definite plan, a wheel is going to fall off somewhere that will alter the state of everything you had in mind. When you cook, you prepare for the 5-thousand (because it’s very possible they might all show up), but be willing to to have lots of left-overs (because NOBODY may show up at all). There will undoubtedly be WAY more “planned” for the day than could ever be accomplished, but you get to what you can and you know that you will always be running late to the next event. However chaotic this may sound (and let me tell you it was very hard on my type-A personality at first), we always have a great time. Maybe it’s because, on the whole, everybody keeps a positive attitude. Maybe it’s because we all enjoy each other’s company enough that it doesn’t really matter what we are actually doing. Or maybe I am just learning that chaos can be fun, but no matter what the source, this weekend was awesome.

It started with a wheel falling off. The cavalry was supposed to roll into Oak Mountain on Friday night, but due to many extraneous circumstances, they called to say they wouldn’t be leaving until the next morning. Tommy, however, did make the trek and Jeremiah, me, Brett, Ashley, Tommy, and Pace had a low-key dinner of Upside-down pizza, corn, salad, and cookies at our house (with plenty of left-overs), followed by a really terrible Oscar-winning movie.

The next morning, the poor cavalry rolled out of bed in Dothan at 4am so they could have a full day with us despite their late departure. I had a type-A standoff with myself about where and how Pace was going to take her 11 o’clock nap, but I finally appeased myself by putting her down a little early and waking her up a little early. Then the girls (Mrs. Maddox, Ashley, Alex, Pace, and me) went for a ladies luncheon, a perusal of the shops in Homewood, and finally a birthday present surprise for Mrs. Maddox at SAKS. We wanted to buy her some perfume, but we wanted her to help us pick it out. A scent, you know, is such a personal thing that you hate to push your ideas on someone else.

By this time, we are approaching 3 o’clock and decide it is time to check in with the boys. They were just finishing up a LONG horseback ride, so we (all of us except Ashley the work-horse who went to gather all of our pre-prepared cook-out items) went to meet them at Oak Mountain. There is something so inviting about the site of a camping trailer, with its canvas awning rolled out in greeting, with hay bails snuggled in a semi-circle for conversation, and with a grill billowing with smoke for an evening feast. As we pulled up, Pace began a chant of “Horsey, horsey, horsey…” followed by an occasional “Neigh!” that lasted the rest of the weekend. She was so excited to be outside, the center of attention, and around horses, that I hardly saw her the rest of the weekend.

Tommy, Alex, and I decided to take the young guys (the less experienced horses) on a mini-adventure. It is so frustrating and sweet at the same time to watch a young horse, anxious to please her rider, but terrified to cross a mud puddle or a log. I was on my favorite horse, little Hope, and she was the most experienced of the three. Unfortunately she is not a born leader. We needed Hope demonstrate to Windows and Curly (the other two horses) the ease of these seemingly scary tasks, but she kept looking over her shoulder, questioning why nobody else was willing to move forward. We were also anxious to pick up our pace and see the horses do a bit of galloping. Again, Hope was looked to as our leader, but she truly loves to enjoy the scenery. “Why would I want to go fast, and miss out on all these pretty trees?” she seemed to ask me. So, our ride was not grandiose, but it was fun. It felt marvelous just to be out in the beautiful Spring weather. It was gratifying to know we were helping the young guys become more experienced carriers, and it was hilarious to see how much trouble we went through to get from A to B.

There’s a lot more to tell, but it looks like this, like many of my weekend stories is going to have to be a two-parter.

One Response to “Trailers, Trucks, Horses and the Whole Crazy Thing (Part 1)”