Published by Abby on September 24, 2007. Filed under Life and Laughter 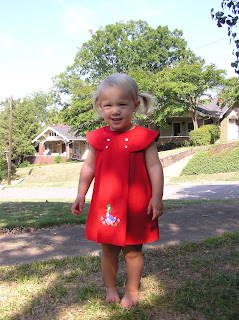 So, I’m uncomfortable physically. I am 2.5 weeks from my October 10th due date, and at my last doctor’s appointment he said there were no signs that Mary Aplin is going to be making her debut anytime soon. Also, I’d gained 2.5 pounds in the past WEEK–to add to the 2 pounds I’d gained in the 2 weeks before that. Honestly, I had been pretty happy with my weight gain during this pregnancy, but now here I am in the home stretch and the weight is multiplying exponentially. This same thing happened last time. Most people either stop gaining or LOSE weight in their last month, but not this girl. Most people say, “I’m just so uncomfortable I can’t eat.” Obviously, “not eating” is not something that happens to me when I’m uncomfortable 🙂 All in all, this is a very trivial problem. I would honestly rather be gaining too rapidly than losing too rapidly…there is no question that this little girl is thriving. I could gripe and list out all the different things that are aching and throbbing, or I could tell you that I put on my outfit to go to the gym this morning and looked so hideous that I couldn’t bear to go, but I am trying not to be as big a whiner as I want to be.

I am also uncomfortable emotionally. I just feel like my life is changing rapidly, and I hate change. Maybe that isn’t quite fair…I think my life has been changing at a normal pace, I think now I am just starting to notice all that happened while I wasn’t paying attention. I went to Dothan this past weekend, and I saw that Mom really is sick. I haven’t given an update on here in a while (and I don’t think I’m up to it today), but right now between her chemo and the cancer she just can’t go like I’m used to her going. That’s hard to see. However, we are all still claiming God’s physical healing ON THIS EARTH, and trying to wait patiently for its fruition. What a fun blog that will be to write 🙂

In Dothan there were also changes like my little sister, Kendall (I still slip up sometimes and call Pace Kendall if that gives you any idea of how I see her in my mind), being on the senior homecoming court. She cheers with little girls that I used to babysit. This big strong football player went up to the microphone to announce something or other about the upcoming game, and it turns out it was scrawny little Brian whose diapers I used to change. It was just bizarre.

Finally, I am emotionally uncomfortable with changes that are happening in my friendships. Maybe it’s because I got married before I was finished with college, or maybe I just have the ability to stay blissfully blinded, but when I think about my best friends from college they, like Brian in his diapers, are still just the same in my mind…and heart. I don’t talk to most of them very much, but somehow I assumed that we all felt the same towards each other as we did when I knew the details of every date they went on or what they liked to eat for lunch on Wednesdays. I think I have created a world where if I turn around and squint just so at the right time of day, I can still see everybody just as I left them when things were at their prime. I can see myself about 20 pounds lighter. I can see Mom, with a full head of hair, running Caroline to piano practice, Taylor to soccer, and Kendall to Kindermusik. I can see my friends from college scattered around our den in North Face jackets talking about how Whitney can get a medical excuse for the test she doesn’t want to take that afternoon. But that’s not where we all are anymore, is it? And that makes me uncomfortable.