Published by Abby on December 13, 2008. Filed under Love and Marriage-Children 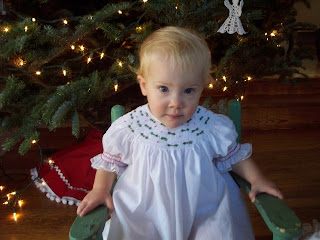 Jeremiah and I have struggled a little lately over whether or not we should “do Santa.” We have heard the opinions of other parents who say they don’t do it because they don’t want to lie to their children. They want their children to know they only speak truth to them, so they don’t look at them one day and wonder if all that Jesus stuff is pretend like Santa. I get it, I see it, but it makes me sad.

Some of my most vivid and wonderful memories from childhood are from Santa. Lying in my bed on Christmas Eve. Straining hard to hear noises on the roof, a rumbling in the chimney. My heart beating so fast with excitement and anticipation that I could not force myself into slumber, even though I knew I must if Santa was going to come. I remember when the veil began to slip, and I started asking questions about Santa. My Mom strove valiantly to keep my belief alive, and I believed long after many of my peers had fallen to the way side. There wasn’t an exact moment I knew he wasn’t real, but instead of being sad or angry or questioning God (as many parents warn me my children will do one day), I felt proud–like I was one step closer to the adult world. I joined forces with Mom, curbing questions and pretending that I believed so that my sisters could still wait breathlessly on Christmas Eve. Slowly, one by one, each sister joined the grown-up team, and even when my baby sister joined us, we couldn’t bear to let go of the game. I don’t ever remember Mom voicing the fact that she was indeed, Chris Kringle. Even as a married woman, I was still coming down the stairs to see what Santa had brought, and it would have been a sacrilege in our house to breathe a word to the contrary.

So, do I rob my children of these memories? Do I think that I am going to hinder my child’s salvation or my tender relationship with them, because I play make-believe with gusto? Really look at what you know to be true about your own parents…How much of it hinges on their attitude towards Santa Claus? Isn’t it more about how they lived their life before you every single day? And, more than anything else, there is only one very narrow window in life when a person has the ability to truly believe in magic. I could not know that I squelched that opportunity for my child. It’s too precious. It’s too valuable, because it’s the footprint that’s been left in my heart–of that time when magic was real–that brings color and beauty to stories I read even now.

I love you friends who have opted to leave Santa in the pretend realm, and I do respect your reasoning, even if I don’t agree with it.

(Just so we’re clear and I don’t get any “Jesus is the reason for the season” blog comments, we WHOLE-HEARTEDLY believe that over here, and I think it is a travesty to let anything, including Santa, overshadow that. I’m just saying I think there’s room for the big guy in red as well.)

33 Responses to “We Still Believe…”