Would You Do It if We Were Dating?

Published by Abby on January 13, 2008. Filed under Life and Laughter 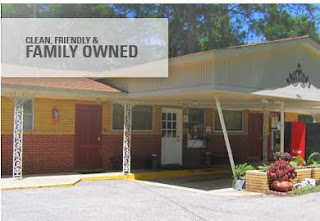 That question has plagued the recesses of my mind since Jeremiah and I have been married. Would you do it if we were dating? I’m not sure what happened to make me fear that I would change after we got married. My Dad never complained about this issue with my Mom, or vice versa. I think it must stem back to all the talks my Dad had with me when Jeremiah and I were engaged. “You know, Abby, you are much more of a type-A personality, and Jeremiah is more ‘Don’t worry be happy.’ Neither of you are too far in either direction, and I think you will compliment each other well. BUT, just be careful, because a lot of times in marriage, there is a tendency for Mr. Don’t Worry Be Happy to drive Mrs. Type-A to be more type-A. It can turn into a vicious cycle.”

In my mind, while I do freely admit to the type-A tendencies, I also love spontaneity. When Jeremiah would drive me home from dates, I used to say, “Instead of you driving me home, just take a right right here and let’s drive to the beach!” And one night, we did 🙂 I was very nervous on horses when we first started dating, but I pushed through and made myself do it because I wanted to be with him. I even nearly killed myself snow-skiing in -20 degree weather because I wanted to seem brave. So, I listened to Dad’s warning, but in my mind could never have imagined losing what, I hoped, was the fun side of myself that Jeremiah helped to bring to the surface.
Enter the Pine Lake Motel…What you see at the top of this blog is a picture of the hotel (actually I think MOtel would be a more proper term) that we stayed in last night. If you’ve ever made the trek from Montgomery to Dothan then I’m sure you’ve noticed it. While dating, Jeremiah and I must have made that trip 10,000 times and each time we’d laughingly comment about wishing we could stay there. What I just learned yesterday, was that our reasons for wanting to stay there varied greatly. In my mind: That’s one of the creepiest hotels I’ve ever seen. People definitely die there. But, if I were allowed to stay in a HOTEL with you, I would even be willing to stay there. In Jeremiah’s mind: That looks like a family operated motel, that’s pretty dumpy, but they really take pride in it and try to make it nice. Wouldn’t it be fun if we were allowed to stay in a hotel.
So yesterday, when we were discussing the logistics of how to transport 2 children, who HATE to ride in the car, from Birmingham to Montgomery so that we could meet his parents and pick up my car (my sister had a wreck in my car while I was home and it just got finished being fixed), Jeremiah suggested breaking up the trip by spending the night at the Pine Lake-like we’ve always dreamed! Oh horror…that nagging question crept into the back of my mind as I heard myself telling him that, “No, I do not want to stay at that scary motel with our two small children. Not to mention the packing, the money,…” I stopped, as I remembered myself at 20, longing to be able to stay, even in the Pine Lake, if I could stay with him. I conceded.
It turns out that the Pine Lake isn’t nearly as frightening on close inspection as its dingy neon sign would have you to believe from the road. I’m not saying that I ever took my socks off when I walked around, or that I didn’t refuse to cover myself with the comforter (that I hear hotels never wash), or that the bathroom wasn’t straight out of 1975, but I went and we laughed about it and it really was fun (and much cleaner than I expected). The night man didn’t look anything like Norman Bates, and Pace told us this morning that she didn’t want to go back to Birmingham, she wanted to STAY at the Pine Lake. 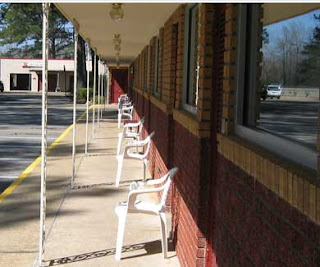 (Good thing they put a lovely, white, plastic chair outside of each room! I know that I woke up this morning yearning to sit there, coffee in hand, and admire the parking lot and Hwy 231.)

18 Responses to “Would You Do It if We Were Dating?”