"You’re Such a Good Mom"

Published by Abby on September 8, 2008. Filed under Faith and my Mom 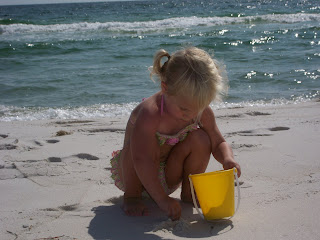 Yesterday, I was on the beach with Pace (who had refused to take her afternoon nap) while Mapple Dapple was napping. I had been planning on this particular hour being my time to just sit in my chair. My time to not be either covered in sand or holding a child in the ocean, and I was skirting the issue hard. “You’re making such pretty castles on your own! You’re such a big girl, you don’t need Mommy to play with you…” It wasn’t working. Then, in my head I heard someone say, “You’re such a good Mom.” I remembered with guilt that I was very pregnant and playing with Pace (who was flipping out because she couldn’t get the sand off her fingers) in the sand when I heard it. It seemed like it was so recent…who had said that? I played the words again, and suddenly I felt that ache that has come to be too familiar these days as I recognized the sweet voice. There is something so jarring about hearing a voice that seems so real and recent in your mind, only to realize how utterly far away they are now…