Published by Abby on April 8, 2011. Filed under Life and Laughter 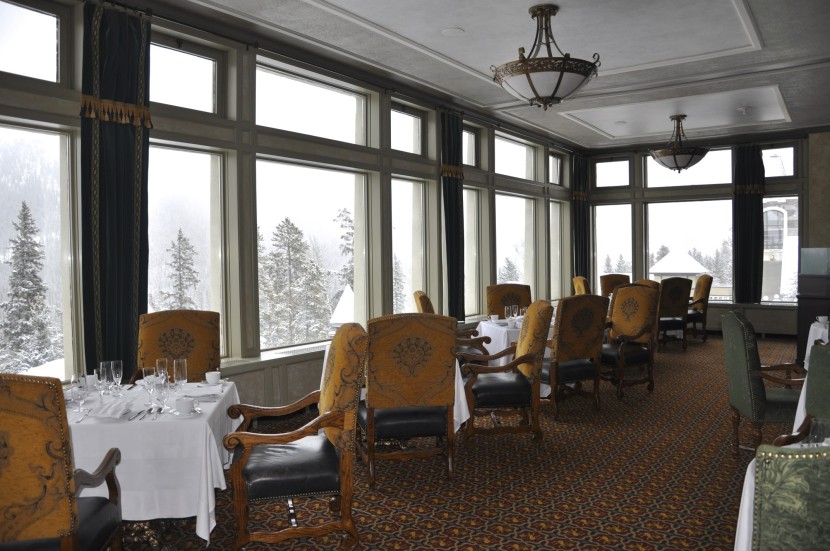 Did I mention that while we were in Banff, we stayed in a castle? Did I also mention that we got to stay for free???!  Jeremiah had a meeting there to present his research from this year.  He already had a room paid for, and I would have hated for him to have to be alone all those days 😉 As people who would one day like to build a house made of stone, can I tell you how long Jeremiah and I marveled over the fact that this entire monstrosity was made of stone?  I’m sure all the mountains around made stone a bit more available as a resource, but STILL. My Dad, who claims to not have an artistic bone in his body, is often telling me to include cars in the background of my pictures.  He thinks they date things well…I tend to not agree, but Dad, I’m gonna have to give it to you here.  I’m sure this photographer was hacked off that speedy Gonzales came dashing into his picture at the last moment, but seeing people leave the hotel by horse-drawn carriage totally makes this shot.  Maybe I’ll start getting more pictures with cars in the way 🙂  Who says Dad is not an artist? I love this room. Love it. And these windows. Umm. I'm just gonna have to give credit where credit is do. Canada, you rock.

Now, while taking pictures of this gorgeous hotel was fun, there was not a whole lot else to do in this national park with waist-deep snow all around.  There is great skiing, but Jeremiah only had 4 hours of free time each day.  Not really enough time to get a lot done on the slopes, and I certainly wasn’t going to go skiing by myself.  So instead, I did what I always dream you’re supposed to do on vacations.  This: I laid in bed, in a robe, and read and wrote and didn’t tense up my shoulders one time.  Normally I have a mile-long list of fun activities I want to cram in, and I’m waking us up at the crack of dawn so we don’t miss a minute.  All meals, all transportation, all paid-for on this adventure…I turned into the slug I’ve always dreamed I could be.

There was a gym, so I did take a run every day, before getting back in the bed.  Jeremiah and I also took a hike one afternoon (the second half of the shots from the last post), and I drank a lot of tea: And I tried to be sure I replenished myself amply, before I returned to my reading. At that particular meal, I was at a table with bunch of spine surgeons, when one of them mentioned that there was supposed to be a really cool “gondola ride” that we ought to try to take.  I responded, “Gondola ride, really?  Won’t that be kind of hard to do with all that snow and ice?”

Everyone stared at me blankly.  I wasn’t sure if there were large quantities of food stuck between my teeth, or if I was the only one at the table who was not struck mute by some unseen force.  I tried to draw them out of their trance, “I mean, wouldn’t it be kind of hard to paddle through all that ice?  Won’t we be cold?”

“They take us to the top of the mountain,” someone said.

“How can they take a gondola that far UPstream?” I asked, totally bewildered.

More blank stares.  I feel my face turn red.  I knew better than to try to talk at one of these things!  Finally, Jeremiah comes to my rescue (approximately 3 minutes too late), and clarifies that everyone is talking about this type of gondola: Not the serenade type that I was picturing:

We took that gondola ride, and it was magnificent. At the top, there was a boardwalk between two peaks, which is where I got to take all those pictures from the last post.  I think I’ve already told you what a great experience it was for me 🙂

We went with these friends.  Heidi and Gareth you have met a couple of times before.  We went together to Leavenworth and the pumpkin patch. But, can I take a second to introduce to Anuj? He cracks. me. up.  He’s an Eeyore, but I don’t think he knows it.  He was serious about this hat…until I could not stop laughing about it.  I love when smart people don’t know they’re smart.  When people who should be proud are humble as humble can be.  That’s Anuj…and he’s an Eeyore.  Have I mentioned that? Anuj was probably laughing at me during this Titanic moment I was having.  I was so moved I didn’t care.

On the last morning of our trip, we had the option to have breakfast brought to our room, or eat downstairs at the (very nice) breakfast buffet.  Everybody thought we were crazy to choose to stay in our room, but when you’re the one making three meals a day, every day, the idea of breakfast being wheeled in to me without even having to put my feet on the floor, was too spectacular an idea to be missed. Chances are he'll be mad about this shot on the blog...but oh well. He looks cute in a robe.

Just to prove that he did work a little bit for us to be able to go on this trip: He looks cute in a suit too. It's hard to be my sister. Pictures for the blog with no warning to put on makeup.

And now, my chicken wings are back at my side!!  Caroline flew them out here and spent a couple of days with us.  Sweet Caroline.  (Those cute shirts are HONEY BEE TEES!!! by my friend Darby.)

It’s funny how badly I think I need a break, and then how bad I miss them until they come back.  I feel a little pointless without them after a while.  Made me wonder what I’ll do with myself when they go off to college.  What if I never let them leave?

And finally a little laugh for the road.  This has gotten WAY too long.  But Locks was in serious, dire need of a haircut. I tried it once myself, and (after 8 hours and one of the worst looking haircuts any dog ever suffered) I swore it was worth every penny to pay to have it done.  Worth every penny, but still hard to fork over those pennies.  So, as you can see, it had been a while.  I took him in and said I didn’t want the normal cocker cut because we like to take him running with us and it’s too hard to keep his feathers clean. (Which means, we haven’t been taking him running and he’s developed a serious case of fat back.)  Just shave it all I said!  Thinking it would also mean a longer time before I had to fork over those pennies again…Well…. Perhaps I should have at least told them to leave some on his ears. I cannot stop laughing at how naked he looks.  Poor Locks.  And it’s still pretty cold out here in Seattle.

15 Responses to “Castles, Caroline, and Cuts”